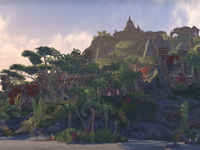 Tideholm is an island off the coast of the province of Elsweyr, where the Topal Bay meets the Southern Sea. It is specifically east of the port-town, South Guard in the region of Quin'rawl. Built inside the island's small mountain is the ruined citadel, Fort Vashr, a Khajiiti ruin that has long since been abandoned. The entirety of Tideholm has been described as a haunted deathtrap.[1]

At one point, Fort Vashr was built into the mountain of Tideholm but was subsequently abandoned for unknown reasons. No indication of its original owners is left in the ruins. For the longest time, Tideholm's existence has been ignored[2] and detested by the people of Senchal and the region. In 2E 561, the Governor of Senchal, Z'har Tasluz gave a speech in the city's palace, part of which denounced the island as a deathtrap and that no one has any business in the haunted ruins.[1]

At some point in time in the mid-Second Era, the Nordic pirate captain, Gjargrida took over the sea east of Tideholm and intimidated most merchant ships into sailing through the western narrow passage between Tideholm and South Guard to avoid her attention.[3]

In 2E 582, as the Dragon threat swarmed across Elsweyr, the rogue Dragon, Nahfahlaar had roosted in Tideholm's ruins, bringing the attention of both the Order of the New Moon and the newly-reformed Dragonguard. The cult disembarked for the island on the orders of their Dragon Priest, Ra'khajin to eliminate the threat to their lord's plans.[4] The Dragonguard had followed suit and quickly displaced the order before confronting the Dragon at the ruin's summit. Instead, the Dragonguard formed an uneasy alliance with the Dragon and later used Fort Vashr's sanctum as their new base of operations.[5]