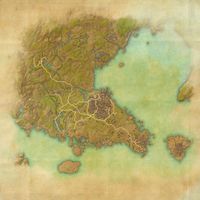 The Quin'rawl Peninsula in southern Elsweyr

The Quin'rawl Peninsula (sometimes simply called Quin'rawl[1]) is a region found in the southeast of Elsweyr between the Southern Sea and the Topal Sea. It is part of the greater kingdom of Pellitine, specifically where the Tenmar Forest slowly opens to a region of perilous highlands across the north, the sandy beaches in the southeast, and the marshes of the southwest.[2] Quin'rawl is heavily centered around Senchal, a major city in Elsweyr that also serves as Pellitine's capital since the upheavals of the Thrassian Plague in 1E 2260.[3] Several islands are found off the region's coast, such as Tideholm and Topal Island to the east, and both Khenarthi's Roost and Dragonhold to the south.

Black Heights
A sleepy mountain-village in the northwest, known for its artistic roots and ancient murals. It is primarily populated by Dagi-raht.
Forsaken Citadel
Formerly the Topal Legionary Academy, it is an abandoned Imperial stronghold in the north end precipices.
Halls of Colossus
An ancient ruin whose origins are shrouded in mystery. It has appeared long before history has been recorded and leaving no indication of its conception.
Moonlit Cove
A former religious site-turned smuggling den was known for its sacred waters and diverse flora and fungi.
Potentate's Retreat
The estate of Potentate Versidue-Shaie
Senchal
A major, albeit infamous harbor-city found on the eastern coastal region, known for its expansive and open-aired markets and bazaars.