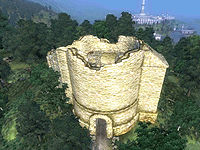 Fort Ash is a ruined keep located deep in the Great Forest, in the province of Cyrodiil. Fort Ash is strategically located on the Black Road, between the Red Ring Road and the city of Chorrol. During the Alliance War in the mid-Second Era, Fort Ash was one of the six vital keeps that determined control of the Imperial City.[1]

Fort Ash was the site of battle early in the Colovian Revolt, between the Colovians under Duke Varen Aquilarios and the Imperial Legion of Emperor Leovic. It was the revolution's first defeat in the conflict, but after the Duke took control of the Imperial Legion from Chorrol, he was able to push the Emperor back into the Heartlands and eventually take the Imperial City.[2] Years later, the Alliance War had swept across central Cyrodiil and each of the three alliances took one-third of the region for themselves. The Daggerfall Covenant seized the northwest and subsequently Fort Ash. It was part of the Transitus Network, which connected it throughout central Cyrodiil and the other keeps. It was surrounded by flatland and small outposts that facilitated mines, a lumbermill, and a farm.[1]

Like many other keeps in Cyrodiil, Fort Ash was active until it was later abandoned sometime during the relative peace of the Third Era.[3] By the late Third Era, Fort Ash was inhabited by an unknown tribe of Goblins, who defended their home from highwaymen and treasure hunters alike.[4]