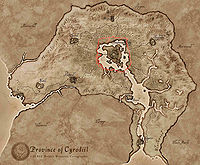 Map showing the route of the Red Ring Road

The settlements of Weye, Aleswell and Pell's Gate are located along the road. It crosses several bridges, including an impressively large bridge which spans the Upper Niben, as well as other smaller bridges which cross the White Rose River. Many Ayleid ruins and abandoned Legion forts also border the road. Due to its central location, the Red Ring Road connects to most other major roads in Cyrodiil.