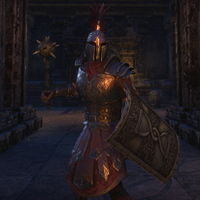 The Euraxians were a faction composed of mostly Nibenese mercenaries who were dedicated to Queen Euraxia Tharn after she illegally took the throne of the kingdom of Rimmen in Elsweyr for herself.[1] They were active during the middle of the Second Era and were seen specially in the region of Elsweyr known as Anequina, which is located to the north of the homeland of the Khajiit.[2]

The Euraxians were formed in the year 2E 576 when Euraxia Tharn proclaimed herself the new queen of the usually traditionally Khajiiti kingdom of Rimmen. The men and women that formed the Euraxians came from the ranks of the massive army of Nibenese mercenaries that Euraxia had hired right after being sent to a diplomatic mission in Elsweyr, taking advantage of the confusion of the period to kill King Hemakar of Rimmen and most of the rest of the royal family, with her mercenaries using the name of Euraxians right after.[1]

Additional mercenaries were hired afterwards and the Euraxians entered in contact with a cult of necromancers to acquire their services, with the mercenaries later establishing siege weapons to ensure their control of Rimmen. It is reported that the Khajiiti people suffered under Euraxian rule as the reign of the Tharn was tyrannical, causing opposition to form both in the people and in the newly formed Aldmeri Dominion which promised help but was unable to deliver due to the outbreak of the Three Banners War.[1] 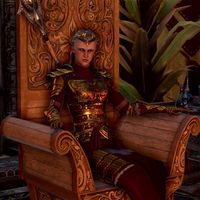 Euraxia in her throne circa 2E 582

Later by 2E 582, they sent a force of soldiers and necromancers to the Halls of Colossus which was able to release a number of dragons thanks to the presence of the Wrathstone that had been brought by Euraxia's half-brother, Abnur Tharn.[4][5] Euraxia then entered into contact with the released dragons and managed to gain an alliance to ensure the control of Elsweyr, although the dragons themselves considered Euraxia nothing more than a puppet.[6][7]

Despite the alliance with the dragons, some of them simply ignored the presence of the Euraxians in the field of battle when they fought against local Khajiit of Elsweyr as they attacked both their own allies and their enemies, with the dragons also not lending Euraxia's legions not more than a dragon at a time. The dragons also withheld information from the Euraxians, as the fact that they were led by Kaalgrontiid was not known until the information was slipped by one of his dragon servants to an Euraxian centurion.[8]

After the dragons were released, the Euraxians turned their attention to locations previously lost, as the Khajiiti militia had managed to retake some of their cities prior to the alliance with the dragons.[9] They mounted an attack to advance on Riverhold, counting with undead resurrected by their necromancers and using supply lines, although the latter were attacked, but they managed to continue their advance, counting with support of the dragons as well, but both were repelled thanks to the efforts of the Khajiiti militia and the help of the Vestige.[10]

By this point, not all of Euraxia's previous allies that had originally arrived with her from Cyrodiil actually supported her more aggressive actions. Those internal conflicts led to the imprisonment of one of the leaders of the cohorts that had been sent with Euraxia, Prefect Calo of the Cygnus Irregulars, which was one of many reasons that caused Calo and his allies to defect and begin supporting the Khajiiti militia instead which caused a loss of Euraxian allies and allowed the enemy to have important information that Calo's faction held.[11] Eventually, the progress of the militia continued against the Euraxians, with the siege weapons that assured control of Rimmen being destroyed, the rebels eventually breached the palace itself and killed Queen Euraxia, leading to the end of Euraxian control over Rimmen.[12] Even after her death, however, her impact continued as she had prepared a final order to send an assassination squad against one of the few remaining members of the Dragonguard as that member held precious information that could be used against their dragon allies.[13]

Even if Euraxia died, her forces remained active and they later attacked the Moon Gate of Anequina with the support of the dragons. They managed to breach the defenses of the militia in the location and injure the Speaker of the Mane, but their army was still defeated and a lieutenant was killed during the advance with one dragon commander being killed right after, with both the Euraxians and the dragons retreating eventually.[14][15] Euraxians were also active in an attack against the Desert Wind Caverns, a location that held ancient Khajiiti wisdom, the strike force was later found by the Vestige who had been contracted by the Baandari to stop their attempts of stealing the scrolls, with the hero acquiring the objects and later turning them back to the Baandari.[16]

With the loss of Euraxia Tharn, the death of Zumog Phoom and their dragon allies abandoning them, the Euraxians scattered, although they remained active in northern Elsweyr for a time afterwards.[11][2] Centuries later, however, their old capital city of Rimmen remained paying tribute to the Mane of Elsweyr, suggesting that the Euraxians were not able to retake the kingdom.[17]