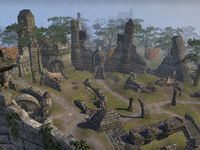 This article is about the ruined fort. For the town with the same name, see Wind Keep.

Aphren's Hold (formerly known as Wind Keep,[1] and later Windkeep Castle)[2] is a ruined stronghold that dates back sometime in the First Era. As the name implies, it is named after the Merchant-King of Wayrest, Aphren Gardner, whose reign was infamous for his desire to expand his dominion by conquering his neighbors. The fort formerly known as Wind Keep became his headquarters, thus taking on his name, but it was ransacked and is now rife with spirits. A nearby town retains the original name,[1] and the underground complex of Storm Talon Temple has at times been actively run by the Blades from beneath the ruins.

At one point in time, Wind Keep was seized by King Aphren's armies and renamed into Aphren's Hold, sometime after his family dynasty was founded, in 1E 1100.[3] King Aphren spent large amounts of time away from this compound, neglecting his daughter, Princess Mira Gardner who was staying here amidst the conquests. However, Aphren's Hold was sacked by the King's enemies, leaving many casualties including his daughter. Aphren shattered his prized sword and scattered it across the ruined remains, and died not long after. He was buried in his tomb under the keep.[4] At some point, the Dragonguard built the hidden fortress, Storm Talon Temple underneath Aphren's Hold.[5]

Ever since then, the fort was abandoned but the town of Wind Keep kept the original name.[1] For the longest time, the ruins were a quiet place until in 2E 582, when the daedric cult, the Supernal Dreamers defiled the sacred grounds and unleashed the spirit's wrath, killing all of them.[6] An associate of the Mages Guild was sent into Aphren's Hold, to recover the lost pieces of Aphren's sword, in the hopes that the King's spirit can reforge. It is unknown if the Mages Guild acquired the sword, or if it was lost to time.[7]

By around 4E 180, Wind Keep Castle displayed Imperial banners, suggesting it was once a military fort for the Empire, and was now occupied by bandits and other unsavory creatures. The Warrior had been enlisted to help clear them out.[2]