"(Player's guild rank), I need someone who can cast the Open spell. Please tell me you have learned this by now." 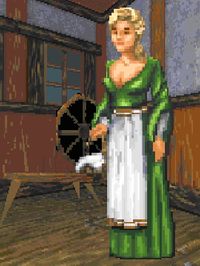 "Well, that's a start. The job I need you for is quite simple. Even a child could probably do it, but here you are. A local merchant, (merchant's name), bought an antique chest, but has been unable to get it open. The best locksmiths in (town) have tried and failed, so (he/she) has asked us if we can help. Now, we really don't have time for such trifling matters, but the Guild could use (his/her) patronage, so I agreed to send someone. From what I am told, it sounds like one of (first mage)'s trick boxes. (He/She) made hundreds of them in (his/her) day, mainly as gifts for (his/her) friends, and they still turn up from time to time, as the workman- ship really is outstanding... where was I? Oh yes, well, the secret to these boxes is that they are almost impossible to open in any way except by the use of the simple, standard Open spell. (He/She) specifically made them resistant to the fancy alternative spells (his/her) friends liked to use. Yes, (he/she) tended to waste (his/her) considerable talents on jokes like this. A real shame. Well, run along."

"Really, you need to devote yourself to your studies if you expect to advance in the Guild." 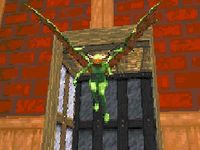 Birthday imps are an annoying trick... 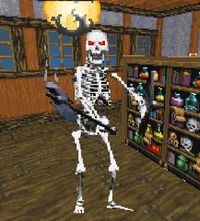 ...but some surprises are worse...

...and some just want to eat you

The merchant and the mysterious locked box are waiting for you in a local pawn shop. Enter the shop and talk to the merchant, who says:

"The Mages Guild sent you? Very good. I knew my old friend (Guildmagister's name) wouldn't let me down. Here is the box. I hope you have some idea of how to open it. I'm at my wits end."

Prepare any circinate Open spell, either on your own or by using a magical item, while the box is in your inventory. It is not necessary to cast the spell, allowing you to conserve your magicka. Once the box is open there are four possible scenarios:

As you cast Open on the chest, the lid springs open and an imp flies out.

Kill the annoyance and report back to the merchant.

You hear the lock click as you cast Open on the chest. Inside is a wand inscribed: "To (third mage) on your 110th birthday. Use me for a preview of your 120th birthday!"

When you use the wand, a skeletal warrior will appear and attack you. Dispose of this undead nuisance and report back to the merchant. You may keep the wand after the quest is over.

Smoke pours from the chest as you cast Open on it. The lid pops open, revealing an engraved card:

Dear (fourth mage)
Hope you like the new place. Did
you remember to call the exterminator
before you moved in?
Your friend,
(first mage)

Some rats and giant bats will show up. Kill them and report back to the merchant.

The lid of the chest pops open. Inside is nothing but a few scraps of faded confetti.

Nothing else happens. Return to the merchant.

Once you have opened the box and disposed of anything that escaped, speaking to the merchant earns you the reply:

"Tell (Guildmagister's name) I appreciate him sending you to help...I guess. Of course, if I had known what was inside, I might not have been so eager to open it!

Afterwards, return to the Mages Guild and report your success to the Guildmagister, who will say:

"Eh? What do you want? Oh yes, the trick box. I trust it didn't give you any difficulty. A little good publicity for the Mages Guild and all that rot. Jolly good."

Any of the followings: