This quest is the last in the Lysandus series. Having successfully finished it, you have completed half of the original mission given to you by Emperor Uriel VII.

Having spoken to the ghost of King Lysandus, you learned that Lord Woodborne is the one who betrayed and struck down the King of Daggerfall. If you have already completed the Emperor's Letter series of quests through Orcish Emancipation, you may be aware that Lord Woodborne is also rumored to be in possession of a certain item of interest. That item is not the object of this particular quest, however.

Woodborne Hall in the Kingdom of Wayrest will be marked on your map after speaking to the king's shade. When you are ready, travel there and head inside to exact ghostly vengeance.

You start at the entrance hall of the castle. A couple of enemies will be waiting to welcome you — kill them. To proceed further, you must reach the very top of the hall. If you have a Levitate spell, you can proceed onward to the next section of the walkthrough. If you can't leviatate, you must first find a way to reach the top level. This can be done by pulling four levers which construct a ramp leading up to the top. You can pull these levers at will—they don't need to be pulled in a specific order. 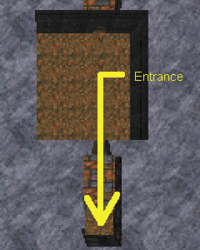 To find the first two levers, go south from the entrance and take the elevator up. 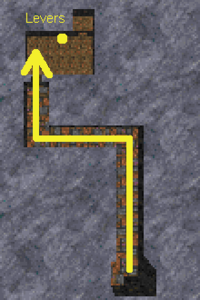 Jump down at the first level and go north from the elevator shaft. Follow the hallway until you reach a room with two levers. Pull the left one and the right lever will open a door to a small room containing two enemies. Go back to the elevator and take it to the top level.

From the elevator, go west past an intersection and into a room at the end of the hallway. Two enemies will be in this room. After you have taken care of them, pull the lever in the next room. Go back to the entrance hall. 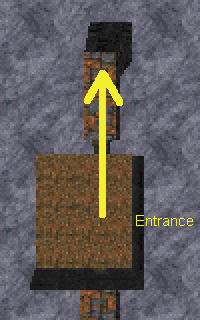 From the entrance, go north and take the elevator up. The elevator goes up as soon as you step on the platform.

Jump off the elevator at the first level and go west until you reach an enemy next to a torch. After the enemy is disposed, pull the torch and a secret door will open. Inside this secret room, you find another lever you must pull. Go back to the elevator and ride it up to the top.

On the top level, follow the hallway past an intersection. On the north wall of the hallway is a secret door opposite a tiny room. Open the secret door and go through. Pull the lever at the end of the corridor. Go back to the entrance hall. 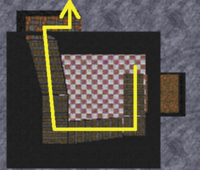 Now that the ramp is constructed, follow it up to the very top of the entrance hall and enter the main dungeon. 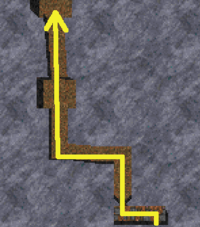 Once you are inside the main dungeon, go through the door at the end of the corridor. Follow the hallway and go north through a landing, then up a ramp to a second landing. 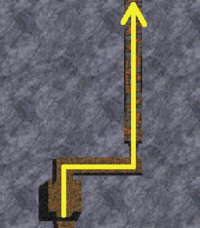 From the second landing, go north and turn east. Go through the door and walk further north. 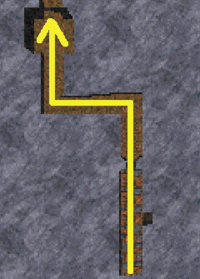 Follow the hallway further north past a door and go through the door at the end of the hallway. Head west and go up to another landing. There you must choose whether you want to find and kill Lord Woodborne or go for his diary. 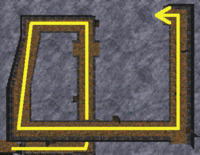 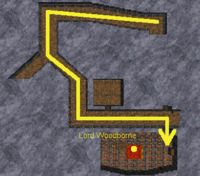 Walk up the hallway until you reach a fork. Take the southeast fork and follow the hallway. Enter the first room to your right and you will find Lord Woodborne, who is a knight-class enemy. 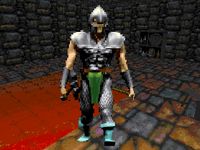 Lord Woodborne looks like any other knight (sometimes even a female knight). As soon as you approach, Lord Woodborne attacks and shouts at you:

"You! You're that (player's race) (player's name). You have been a thorn in my side for a long time now. A wiser (player's race) would have let sleeping kings lie. Especially when I have gone to such great lengths to kill them. Yes (player's first name), I killed King Lysandus. And now it will be a pleasure to slay you. En garde!"

When you first attack him, he casts three spells: Spell Reflection, Shield, and Heal on himself. If you are a spellcaster, hit him with all kinds of nondestructive spells first. No matter what your skills are, don't waste a magical item or use a spell in the first attack that inflicts damage, since it will just get healed. Kill the nobleman to avenge Lysandus' death. When Lord Woodborne dies, he leaves you with these words: 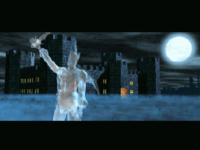 King Lysandus is at last able to rest;
the wraiths and ghosts of his loyal soldiers
vanish as his soul passes to the underworld,
leaving the city of Daggerfall to the living.

Backtrack to the dungeon entrance if you haven't set a Recall anchor there and seek out or await your next quest.

If you want to get Lord Woodborne's diary, go east from the landing and through another landing. Follow the hallway down and turn east at the intersection. Go through this hallway past a secret door until you reach a normal door. Go through this door.

Follow the hallway east and watch out for enemies that are waiting in the rooms along the way. When you reach an elevator shaft, you will notice a wall blocking your way to the west. Just drop down the shaft and ride the elevator to the top. Ride it down again and the wall will be gone; however, if you go too far away from the shaft the wall will come up again. In this case you must take the elevator up and down again. Once the wall is gone, go into the room. Watch out for the two enemies there, usually a battlemage and a spellsword. Among some treasures, you will find a page of Lord Woodborne's diary. Grab it, and read it if you wish. 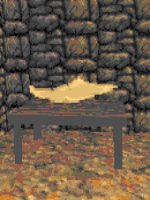 A page of Lord Woodborne's diary

The diary page reads as follows:

This passage contains many interesting revelations:

Your goal is to use this information to choose an individual to deliver the diary page to; someone who can use it against Lord Woodborne, thus sealing his fate and avenging Lysandus' death. If this is properly accomplished by giving the page to one of the right people, you will see the video sequence of the king's spirit finding rest, as seen above. Delivering the page to the wrong people will prevent Lysandus' revenge at best, at worst you will be betrayed and attacked. Backtrack to the dungeon's entrance if you haven't set a recall anchor there, and seek out someone who can finish the task.

The pool of potential recipients includes most of the major nobles and powers in the Iliac Bay region. The response (and any attendant reward) you receive depends on whom you choose to give Lord Woodborne's diary to.

"This means little to me. It is trash fit only for being burnt. Gothryd and Woodborne plotting to kill Lysandus. Really! Go away."

"Lord Woodborne is the slayer of my dear Lysandus. There shall be justice, and it shall come from my hand! You would do best to stay clear of Woodborne Hall and Wayrest for some time (player's name)."

"This is atrocious! After all the affection we showered on that fool Woodborne! We nearly married that villianous [sic] swine to Elysana -- nearly handed the throne of Wayrest to a cad of the first order! Good (player's first name), it was the right thing to do to bring this to our attention. Rest assured that Lord Woodborne will be arrested and executed for his treason, his name barred from the books of honor, his acquaintances interrogated, his fortune confiscated. As a gift, please allow me to give you (random gold) gold pieces as your share of his property confiscations."

"This information is quite valuable (player's first name). Let me gift you with (random gold) gold for giving it to me. This will be quite handy in the coming conflict."

If you give the diary either to Aubk-i or Gothryd:

"You were completely correct to bring this to me. Otherwise it might have gotten out where it could do Lord Woodborne damage. Guards! Kill this (player's race)!"

In addition, giving the diary to Akorithi, Aubk-i, Gothryd, Gortwog or the King of Worms will NOT trigger the video sequence, as they are unwilling (or unable) to exact vengeance on Lord Woodborne. Therefore, to complete the quest you have to give it to one of these people: Barenziah, Eadwyre, Helseth, Medora, Mynisera, or Nulfaga.

Depending on the person to whom you gave Lord Woodborne's diary, you will gain the following reward (see Bugs for more information):

If you gave the diary to Akorithi, you will not gain or lose any reputation.

If you gave the diary to either Medora, Mynisera or Nulfaga:

If you gave the dairy to either Barenziah, Eadwyre or Helseth:

If you gave the diary either to Gortwog or the King of Worms:

If you gave the diary either to Aubk-i or Gothryd:

Depending on how the quest ended, NPCs may also comment: