For the region, see Sentinel.

The Crest of Sentinel 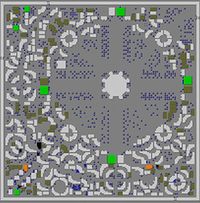 The Palace of Sentinel, or Samaruik as it is also called by the citizens, is the dominant structure of the capital of Hammerfell. The castle is enormous and, together with the extensive parkway surrounding it, occupies a good part of the city's total area. The royal family of Sentinel as well as the courtiers and the diplomatic body of Daggerfall reside inside this citadel.

This article, which is part of the Daggerfall Redesign Project, is a stub. You can help by expanding it.
Retrieved from "https://en.uesp.net/w/index.php?title=Daggerfall:Sentinel_(city)&oldid=2429035"
Last edited on 21 June 2021, at 02:01