Speak with Tienius Delitian in the Royal Palace Throne Room upstairs from the Royal Palace Reception area. He'll ask you to help find out the recent rumors about the death of King Llethan. You are to gain their trust, as he puts it, and see what they speak about (you may need as high as a 100 disposition in order to find out).

Talk to people in Mournhold about King Llethan's Death. Among a number of things you'll hear one related to King Helseth poisoning the former King. You should receive a journal entry telling you to report back to Tienius.

Returning to Tienius, he takes the information you have about the possible poisoning and wants more info. In particular, he wants you to find a copy of The Common Tongue, a publication that recently has been circulating critical articles about the new King.

There are several copies of The Common Tongue. You can find one lying on the ground next to a merchant stall in the Great Bazaar, just northwest from the exit from the Plaza. Other two copies can be found at The Winged Guar, the tavern in Godsreach. One is inside, on the counter, the other one is outside, on the second floor balcony. There are also many others in shops and houses throughout Mournhold. 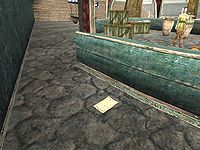 An issue of The Common Tongue

Return the paper to Tienius who will thank you and ask you for further assistance.