To start the Tribunal expansion content, simply use Rest (not Wait) for any length of time, and your sleep may be interrupted by masked Assassin from the Dark Brotherhood. The attacks are randomized, and the likelihood of one (as well as the level and, eventually, number of assassins) increases as your level goes up. Don't underestimate this leveled opponent, as he will have a good weapon and a decent amount of health.

If you wish to sleep without being attacked and beginning this quest, use the bedroll in the basement of the Census and Excise Office in Seyda Neen. The attack script excludes that interior cell to avoid breaking character generation, and continues to exclude it after character generation is complete. If you want to trigger such an attack on purpose, you can simply use Rest for 1 hour repeatedly, while in the wilderness or at an inn.

If you are too weak to kill the opponent (e.g., if you have just started the game but have also installed Tribunal), you can use Almsivi Intervention or Divine Intervention (you can find these spells, and scrolls and other items that provide them, in many places, including Arrille's Tradehouse at the start of the game) to escape by teleporting to another place. Recall/Mark can also be used. Luring the Assassin to a town doesn't work, as the Guards won't help you fight him. The Assassin will remain where you left him, so it is advisable to sleep in a place you are not planning to frequent, as these attacks always come while sleeping (and will interrupt sleep, preventing leveling and healing).

Each Assassin is armed with a short blade (see Dark Brotherhood Assassins § Gear for details), and wears a full suit of Dark Brotherhood Armor, the second-best Light-class armor in the game, the lightest, and worth a nice sum of gold. You may wish to keep a set indefinitely, for times when you need to haul a lot of loot. If you can manage to kill the Assassin before he can use it, you also find a Carved Ebony Dart on his body (and get a Journal entry stating so). Getting or not getting the dart doesn't affect the Tribunal Main Quest in any way, and it is a poor weapon; the dart is simply a prize (worth 2,000 gold). The stronger Assassins (after you are level 20) may wield a Daedric Tanto, Daedric Wakizashi, or Adamantium Jinkblade of Wounds. (This may be seen as a reason to long-delay the later stages of this quest, and thus the rest of Tribunal. However, you'll get weapons at least this good much sooner from other opponents, e.g. at Daedric shrines, and you can get these exact weapons, when you are high enough level, from other Dark Brotherhood operatives later in the Tribunal expansion; they are not unique to your sleep-attackers.)

The Assassin may spawn in another room if you have an interior wall at your back, and will not become hostile towards you until he sees you. This is a good opportunity to prepare for the attack and more likely obtain the Carved Ebony Dart from the Assassin (e.g., by barging in and quickly using Paralyze). You will incur a Bounty if you are witnessed somehow attacking the Assassin before he is in combat mode against you (usually by using a strong Chameleon effect). The Assassin is capable of opening doors, if already aware of your presence, other than those that are locked or which trigger a loading screen.

Once you've killed the first such Assassin, you receive a Journal note to find a Guard and inform him about this attempt on your life. This must be a normal Guard (Imperial, Great House, or Ordinator); you cannot use a special guard such as the Duke's Guards.

The Guard will be amazed that you survived the attack, and will advise you to speak with Apelles Matius in Ebonheart. If you put off this visit, you may be attacked again and again when you sleep.

Once in Ebonheart (southeast of Seyda Neen and south of Vivec's Hlaalu Canton), any normal Guard should be able to tell you that Apelles can be found "wandering the battlements" close to the main castle (he is actually on the stairway to the bridge from the outer buildings to the main keep). Find him and ask him about the Dark Brotherhood and the conversation will quickly lead towards the mainland of Morrowind. Apelles will tell you to speak with Asciene Rane about transport to Mournhold, the capital of Morrowind. 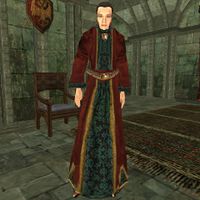 Asciene can transport you to Mournhold.

This mage can be found in the Grand Council Chamber in Ebonheart, just to the right of the front entrance in the main hall. Ask her about Transport to Mournhold and tell her that you've been "marked by the Dark Brotherhood" to be teleported to the Royal Palace in Mournhold. To travel back to Vvardenfell, speak to the Argonian Effe-Tei in the same entrance hall where you arrive. This fast travel is specially scripted, and is not the same as normal Guild Guide travel; it works on the player character only, and cannot be used with companions like Fjorgeir, the Shock Centurion, or Calvus Horatius.

Closing the Quest in MournholdEdit

Talk about the Dark Brotherhood to almost any Guard in Mournhold after your arrival there. Though the entry says you're supposed to talk to a Royal Guard, a High Ordinator will also work (a Hand of Almalexia will not). Increase (if necessary) the Guard's disposition to at least 40. You'll get a new Journal entry, which completes this starter quest.

This does not finish your involvement with the Brotherhood. The Guard tipped you off that the Brotherhood may be hiding in the sewers under the Great Bazaar. This will set you on the path for the later quest Hunt the Dark Brotherhood, another part of the Tribunal Main Quest, which will lead you to their base and boss. You can begin it at any time, but completing it is challenging.