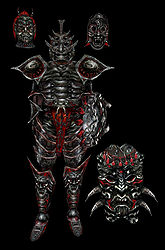 "Daedric weapons are made from raw ebony which has been refined using the craft and magical substances of the lesser minions of Oblivion. The process is not a pleasant one for the Daedra involved, and the weapons retain echoes of preternaturally prolonged suffering endured during manufacture. Daedric weapons are the most rare and expensive weapons known in Tamriel." - Garothmuk gro-Muzgub

An alternative way to acquire the protection of Daedric Armor without finding all of the pieces is to use Bound Armor spells. These share the appearance and stats of standard Daedric Armor, in addition to carrying some useful Constant Effect enchantments. Their only drawback is that they are temporary, and disappear when the spell wears off. In addition, there are no Bound Greaves or Bound Pauldrons effects in the game, so you cannot get a complete suit of Daedric Armor this way. Bound Daedric armor is considered light armor, rather than heavy armor. Therefore, it increases your Light Armor skill rather than Heavy Armor. Bound Armor also does not take your skill into account, always having 65 armor rating.

Daedric Armor is incredibly rare. In some cases, only one example of each piece exists, and in order to acquire them you will have to take them from their owner: Divayth Fyr. Since Divayth is an Essential character to the Main Quest, it is highly inadvisable to kill him in order to obtain these items prior to completing his portion of the story. A safer, but by no means simple method is to repeatedly cast Disintegrate Armor spells on him until the armor breaks, cast Calm Humanoid to stop him from attacking you, and then pickpocket the broken armor off of him. This is only necessary in order to acquire the Cuirass and the Pauldrons, as the other pieces can be found elsewhere (and there's an enchanted version of the Cuirass given by Mistress Therana as a reward for a quest). Fortunately, if you have both Tribunal and Bloodmoon installed, there are other ways to acquire these missing pieces which do not involve harassing or killing an essential character in the game. One piece, the Tower Shield, can only be found randomly by killing golden saints.

Be aware that a full set of Daedric armor (not including helm or shield, which combined add 60 pounds) weighs 294 pounds, still over half your total encumbrance at 100 strength, and requires at least 60 strength to wear without becoming over-encumbered. This makes it by far the heaviest armor in the game, 88 pounds heavier than a similar suit of Ebony armor. Additional pieces, such as a shield or helm, will require even more strength to wear, meaning that you will probably have to make use of Fortify Strength or Feather effects if you wish to put your suit to practical use (carrying it with weapons, potions, scrolls, etc.). Considering how heavy Daedric weapons are (a Daedric longsword weighs 60 pounds, three times the weight of a steel longsword), it is a good idea to enchant your armor with Fortify Strength effects to avoid having to carry even more equipment just to wear your already massive suit. If you choose to offset the weight by wearing only some parts of a full Daedric set, note that helms provide the most armor by weight, while greaves and boots are the least efficient. Helm, gauntlets and cuirass provide 50% of the armor of a full set - and the four most enchantable body segments - with only 135 weight. Also note that there is a Great House Telvanni quest reward set of daedric cuirass and greaves available with a constant 50-point each feather effect; while a daedric cuirass can be better enchanted with strength, the enchanted greaves are the most armor-for-weight efficient in the game, with an effective weight of 4 pounds.

Other sources for a possible random Daedric Melee Weapon

There are many places with random respawning Daedra or guaranteed Dremora or Golden Saints e.g. Daedric Shrines.