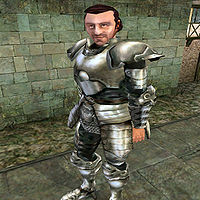 Apelles Matius is an Imperial guard who is interested in hearing about any Dark Brotherhood activity on Vvardenfell. Once you have been attacked at least once by the Dark Brotherhood, talking to Apelles will bring an end to the attacks. In addition, he will direct you to speak to Asciene Rane about transport to Mournhold.

He wears a near full set of the valuable Adamantium armor, including the cuirass, both pauldrons, both bracers, greaves, and boots, and he is wielding an Adamantium mace. Aside from his natural charm and ability to absorb fatigue from others, he knows no spells.