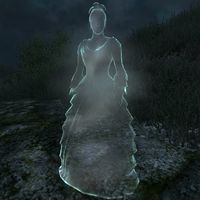 Salonia Viria is an Imperial knight whose soul is bound to wander the Hill of Suicides for eternity. The strain of the Shivering Isles apparently got to her, as she took her own life, only to wind up on the Hill. Only by locating and returning her skull from the ruin of Cann can her soul be freed.

Still dressed in her real-life Black Finery, Salonia's ghost is located halfway up the hill, on the western side. She will stroll restlessly around, at times overlooking the surrounding body of water, waiting to be released from her cursed existence. You will not be able to communicate with her, unless you have claimed her skull from the altar in the Cann Amphitheater; she will then spread out her arms and reward you, then venture on to a more peaceful fate.