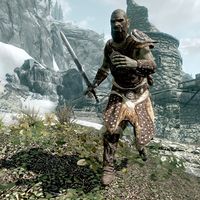 A Silver Hand wielding a silver sword at Gallows Rock

The Silver Hand is a group of organized criminals. Originally a group of werewolf hunters, it has since become perverse. Its members indiscriminately attack the player (regardless of affiliation) and other factions, including Vigil of Stendarr, Dawnguard, and Mirak's cultists. In the past, they've captured, tortured, and murdered civilians.

Silver Hand is the historical enemy of the Companions, as they are aware that The Circle members of Companions are lycanthropes. According to Kodlak Whitemane, the two groups have repeatedly bled each other. To spite the Companions, the Silver Hand twice attempts to steal scattered pieces of Wuuthrad, the shattered axe of Ysgramor which was of great importance to them.

The Purity of Revenge quest has the player eradicate the Silver Hand for good.