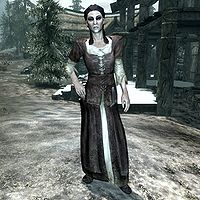 Idgrod the Younger is a Nord sorceress living in Highmoon Hall in Morthal. She takes care of her brother, Joric, with the help of potions given to her by Danica Pure-Spring. Their parents are Idgrod Ravencrone and Aslfur.

She sleeps from 10pm to 8am, and starts her day by going outside Highmoon Hall to watch over Joric. At 3pm, she enjoys a stay at Thaumaturgist's Hut to visit Lami and converse with her.

She wears a set of farm clothes and a pair of boots. She is equipped with a steel dagger, and carries a selection of common items and gold.

She will often express her concerns over Joric with remarks like "Please don't mind Joric. He's not mad, really he's not." and "For now, looking after Joric is my job." When not worrying about her younger brother she will often worry about herself by telling you that "I don't... I haven't mother's gift, not quite, but I've seen things.", "Someday I'll be Jarl. Mother reminds me often. I hope I can help the people of Morthal the way she has." and "It's difficult sometimes... To know whether what I see is real or not." If she is exiled to the Blue Palace, she may also tell you, "I keep hoping this is another vision, that it's not real. But it is, isn't it? We really have lost our home.", and "To be driven from our homes, to be forced here... this is the last thing that Joric needs."

If asked what is wrong with Joric, Idgrod will say, "My brother is... sensitive. He has trouble focusing his attention on things. We were taking him to the Temple of Kynareth in Whiterun, just so the healers could make sure he was in good health, and they say he's fine." She will continue by asking, "Are you heading to Whiterun? Could you take this letter to the priestess, Danica Pure-Spring? It's a note about Joric's health." You can refuse, and she will reply, "Very well." Accepting her request will have her say, "Thank you."

If Hjaalmarch is captured by the Stormcloaks, Idgrod and Joric will be exiled to the Blue Palace in Solitude.

Idgrod may have some conversations with Lami at Thaumaturgist's Hut:

Idgrod: "I like your shop, Lami."
Lami: "Thank you, dear. It must be nice to get out of the hall every now and then."
Idgrod: "Oh, I quite like living in the hall. Mother says it's an honor to live there and serve Morthal."
Lami: "Oh, of course! I'm sorry, I didn't mean to say that it's not."
Idgrod: "Morthal will be mine to govern someday. I have a great deal to learn."
Lami: "Yes, I'm sure that's true."

Lami: "How are the headaches, dear? You or your mother still having them?"
Idgrod: "Oh, yes. All the time. They come with the visions, as always."
Lami: "Are you sure you don't want something for them? I may be able to brew you something to help."
Idgrod: "Oh no! I couldn't. Mother says they are a burden we must bear for our gift."
Lami: "Well dear, you know where to find me if it ever becomes too much for you."

Inside Highmoon Hall, she may talk to her mother: