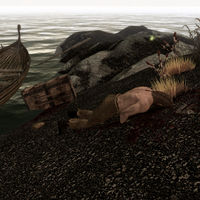 Hrodulf is a dead Nord farmer found along the coast of Solstheim near a boat south of his old house. He was presumably killed by the burnt spriggan standing over his body. He only possesses a pair of ragged trousers and boots. Judging by his journal, he had become obsessed with the noises of the Dwemer machinery still operating beneath his house, and refused to leave despite the pleadings of his lover Bjornolfr, who lived in Solitude. Despite Hrodulf's warnings, Bjornolfr eventually came to find Hrodulf, but he was killed by a pair of reavers who had taken up residence in his lover's house. Next to Hrodulf's body is an apprentice-locked strong box and a chest, both of which contain a decent amount of loot. There is an amulet of Mara and a gold diamond ring in the boat resting on one of the wharfs.