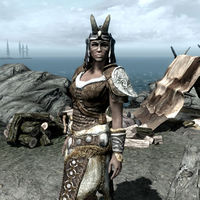 Hilund is one of the Nords initially found at Bujold's Retreat while battling for control of the Thirsk Mead Hall. If Retaking Thirsk is completed, she relocates to the Thirsk Mead Hall along with the others. If you speak to her after completing the quest, she will ask you to do her a favor by collecting some Riekling spears for her. If you do so, she becomes a potential marriage candidate. Hilund is the younger sister of Bujold, and thus the sister-in-law of Kuvar.

Hilund wears scaled armor with matching boots, bracers, and helmet. She carries a Nordic mace and a steel shield.

When first met, she may greet you by saying:

"If you're here about the Rieklings just... tread quietly around my sister."
"Bujold feels so guilty about what happened. Try not to provoke her."
"They just came on so quickly..."
"Just... leave us. Please."

If she gets released from the Beast Stone, she will react confused:

Once she's back at Thirsk, these greetings will change:

"A lot of work to do around this place..."
"You ever tried hunting with no sleep under you? It wasn't pretty. Now I can rest properly, it should all be going better."
"Just warming up for a bit here, before I head out and take some revenge on those Rieklings."
"Once Halbarn's done sharpening my blade, those Rieklings are going to pay..."
"Just one more mug of mead, and then I'm off!"
"Make it quick. I won't be here much longer."

While initially found away from the hall, she may talk to her sister or brother-in-law.

Bujold: "What now?"
Hilund: "I just wanted to make sure you were all right."
Bujold: "Your worry helps nobody."
Hilund: "It's not your fault. There were too many of them. Nobody could have known..."
Bujold: "Don't you see, though? None of that matters. I'm going to go down as "the Unworthy" because of that rabble."
Hilund: "You don't have to live like this now, though."
Bujold: "Unless you're ready to go fight those things, just leave me."

Afterwards, back in the mead hall, she will find her companions with a more positive attitude.

Hilund: "Are we off on the hunt again, soon?"
Bujold: "Calm yourself, Hilund. There's plenty of time for that. Solstheim isn't going anywhere."
Hilund: "But Kuvar's been saying..."
Bujold: "Don't worry about Kuvar. Just be patient, and enjoy the between times, like this one."

Kuvar: "I'm proud of you, Hilund. You've held up well."
Hilund: "Thanks to you. You've taught me a lot."
Kuvar: "There's more, yet. Don't get too comfortable."
Hilund: "Are we hunting soon?"
Kuvar: "We are if I have anything to say about it."

People seem pretty tense around here.
"You don't know the half of it. Bujold's just embarrassed, I think. Doesn't help that her husband is one of the loudest complainers. She's always been quick to shame."
Who's her husband?
"Kuvar. He thinks we've all gotten a little too soft. I can see what he means looking at Elmus, but the rest of us still have our edge. At least, I think so. And... don't tell Elmus I said that."
Have you known Bujold a while?
"All my life. She's my big sister. Don't worry, most people can't tell we're related. But... she's always trying to be the one in charge, and feeling terrible when something goes wrong."
Are you one of the warriors from Thirsk?
"That depends on who you ask. I fight. I protect the hall. I bring in meat. And I think I could take on most of the tree lovers up in the Skaal Village. But because I'd rather drink a mug of mead at night instead of training until I drop, Kuvar calls me a layabout. Wish he would just lighten up."

Should you help the warriors retake the hall and finish up the quest by exiling Bujold, Hilund will react quite shocked:

How do you feel about Bujold?
"I can't believe Kuvar would do that. To his own wife! I'll head out looking for her eventually. We'll wander the wilderness together. Just have to get some things in order here, first."

How is the hunting going?
"To tell you the truth, I've been a little distracted. I've got this... idea. I want to make a reminder. So we never forget what happened the last time we got soft. I want to ring the whole hall with their little spears. Mocking us, from the past. Making us work harder. Fight better. The only problem is, I'm going to need a lot of spears. A lot. So, if you could find a bunch of them for me, that would make it easier on me."