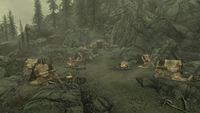 Bujold's Retreat is a camp east of Thirsk Mead Hall inhabited by Nords exiled from the hall by rieklings.

It is named for the group's leader, Bujold the Unworthy. 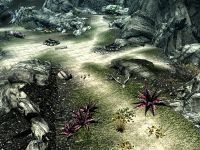 * It is only possible to complete one of these quests, as completion of one will automatically cause the other to fail. However, you can start and complete the first two objectives in the riekling chief's quest, then change allegiance before agreeing to his third objective by deciding to instead support the Nords camped at Bujold's Retreat.

The camp consists of five small tents, a larger tent, and three campfires. Each of the small tents contains an owned hay pile, and the larger tent contains three. All eight hay piles and all low-value items in the camp will be free to use and take after completing a favor for Elmus.

To the northwest is a campfire with a cooking pot (see bugs) hanging over it and two small tents. Two bowls of horker stew are on a rock next to the campfire just outside the west tent. Between the tents are four sacks, an unusable barrel, two crates, and a basket containing five leeks. The north tent contains a random helmet, with a wood pile and a corundum ore vein behind the tent.

To the southeast is another campfire surrounded by a bench and the other three small tents. To the left of the northeast tent is a wood chopping block, a woodcutter's axe, and a knapsack, with a random bow and a quiver of arrows inside the tent. To the right of the east tent is a rack holding three rabbits and two pheasants. To the left of the southwest tent are two bottles of ale and three sacks on and next to a tree stump, with a salmon steak inside the tent and a tanning rack to the right of the tent.

To the southwest up a short slope is the larger tent, flanked by a third campfire and a bench. The tent contains a knapsack, an apprentice-locked chest, and a table and bench holding a random helmet, a random war axe, three bottles of ale, a bottle of Black-Briar mead, a horker loaf, a random dagger, and a large coin purse.

To the east on the shore below the camp is a small dock with two rowboats, with three sacks on the pier and a fourth sack near a stack of three crates on land. Next to the crates is a framed fishing net holding an owned silverside perch and an unowned histcarp and cyrodilic spadetail.