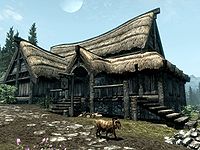 Exterior of the Tavern

Four Shields Tavern is an inn in the village of Dragon Bridge, (Haafingar). It is the only building on the eastern side of the road through Dragon Bridge.

Faida is the proprietor, and Julienne Lylvieve works there while learning the innkeeper trade, hoping to eventually establish her own inn.

* Varnius will only be present after his petition has been heard at the Blue Palace.

Like all inns in Skyrim the entrance leads directly into the common room, which has a fire pit down the middle of the room. There are five long wooden tables and benches against the side walls with a selection of bottles of alto wine and wine as well as a few loaves of bread on all the tables. The left-hand table against the north wall also has a flower basket containing two pine thrush eggs and a chicken's egg, while the table in the southwestern corner also has several pieces of cheese and two salmon steaks on it. There are several food barrels around the room, including one that is a fish barrel.

The counter is in front of the west wall and has a bottle of alto wine and several pieces of cheese on top. Underneath can be found a steel warhammer, three small coin purses, two bottles of alto wine, six bottles of wine, fourteen bottles of Nord mead, five loose septims and a copy of Of Fjori and Holgeir. Along the west wall are five large vats with three racks hanging from the ceiling holding ten rabbits and six pheasants, with two garlic braids, a bunch of dried elves ear and a bunch of dried frost mirriam also hanging from the ceiling. There are three doorways off of this room, one to the north and two to the south. There is a set of shelves on either side of the doorway to the north holding two bottles of alto wine, six bottles of wine, seven bottles of Nord mead, four loaves of bread and three bunches of elves ear.

The bedroom to the north is the largest and can be rented for 10 septims per day. It contains a single bed in the northwestern corner, with two dressers along the north wall both containing clothes and having a bottle of alto wine, a steel dagger, three bottles of Nord mead, a flute and a drum on top of them. There is a large coin purse to the right of these, in the northeast corner with a few food sacks in a pile on the floor in front. Against the east wall is an unlocked long chest, while against the south wall is a square wooden table and chair with a goblet and bowl on the table.

This is the merchandise found in Faida's merchant chest. These items are only available if purchased from the merchant; they cannot be pickpocketed or stolen. They are restocked every two days.