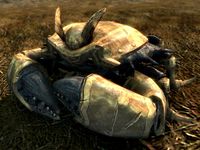 The crab is essential, and will not engage in combat. Its main function is to carry items, and it has a carry weight of 20 and it will follow you even if you already have another pet following you. You can instruct it to wait at a city, wait at its current location, wait at your house, or to carry items. It can also be summoned using a teleportation spell. The mudcrab cannot be detected by Detect Dead or Detect Life.

If following you, it will occasionally give you leveled clutter, which could be an ore, a Dwarven clutter item, a gem, a soul gem, or gold.