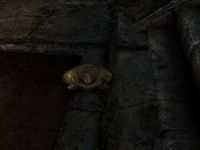 The Mudcrab in its initial location, hiding in Calcelmo's laboratory

It's a mystery how, why, or where this faithful companion received his special armor, but one thing's for certain - nobody's seen a Mudcrab like this before. (Pet can be purchased from Calcelmo in Markarth.)

This Creation allows you to purchase the Dwarven Armored Mudcrab from Calcelmo in Understone Keep.

The deed will be marked as stolen and the spell tome Teleport Mudcrab will still be added automatically. This saves you 100 gold!