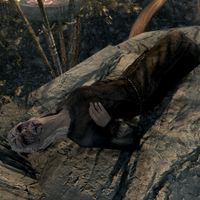 Daenella is a dead Breton who was a witch of the Beldama Wyrd. Her body is found at Karthspire Camp during Crypt of the Heart, on the rock where normally the dead Giant lies.

She wears black mage robes with matching boots. A random selection of gold based on your level can be found on her body, and possibly a gem and/or an ingredient. Additionally, she knows the spell Healing. 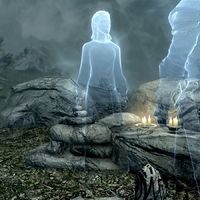 Daenella appears as a ghost after you've cleansed Simon Rodayne's Heart at his grave, together with the ghost of Simon Rodayne, to show their thanks for reuniting them.

Other than her ghostly appearance and the lack of leveled loot on her, she is identical to the version above.