Coldcinder Cave is a small cave with two entrances: one via a grate in the Bulwark Jail, and the other through a trap door atop the cliff just southeast of Raven Rock, near the top of the Bulwark. The exterior trap door entrance does not have a map marker, but can be found by climbing to the highest columnar basalt rock formation south of the Bulwark and north of Kolbjorn Barrow. The trap door is just below the southern edge of this formation.

The cave allows for a cheap and easy exit from the jail. Unlock the grate in the jail cell, drop down, follow the passage to the next drop, then enter the cave. 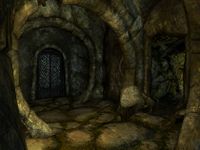 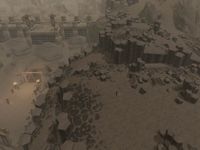 When dropping into the tunnel beneath the Bulwark Jail, the path leads to the north. At the far end is a grate above you with the prisoner's belongings chest in easy reach. On the ground is a second grate, this one unlocked, opening to a drop into a narrow tunnel. The tunnel continues north, then after a few twists and turns emerges in a corridor in the ruins of an ancient Nordic structure, with a cave-in to the west, and an iron door to the east leading to Coldcinder Cave.

There are several lootable skeletons scattered throughout the cave, with many glowing mushrooms, Nordic barnacle clusters, scathecraw plants, and trama roots found inside.

Through the entrance door from the jail is a wide flight of stairs leading down to the east. On the left is a collapsed ceiling spike trap near the bottom of the stairs, while at the end of the room are more stairs descending to a partially flooded tunnel, with the walls made of fractured rock. As you continue along, beware a skeever in the tunnel. The tunnel gradually bears to the south before opening into a large cavern with a small central island and waterfalls cascading down the walls. There is also a family of Netches here; they can be easily dispatched at range with either magic or a bow from inside the tunnel, where they can't reach you. Once the netches are dealt with, several pearl oysters are found around the central island and walls. The tunnel continues to the south before turning to the southwest and climbing an earthen ramp. From the top of the ramp, a series of bridges link several raised platforms crossing another partially flooded cavern to some dry land to the east-southeast, where there is a ladder that exits the cave via the trap door entrance above The Bulwark.

From the dry land, it is possible to explore the partially flooded area of this second cavern. There are a few more pearl oysters in this area, and a tunnel heading southwest which eventually opens into a third cavern that rises to the southwest. Following the northwest wall to the end leads to a series of flights of stairs that climb the bank. At the top is a plateau with a leveled ash spawn that will rise from the ground on the left, with rubble and debris scattered all around. There are a few minor items in this area, including two bowls of bone meal along the northwest wall near a skeleton, and a honed draugr war axe opposite along the southeast wall near another skeleton. Near the entrance to the third cavern and nearly buried in ash are two burial urns and a set of shelves holding a random empty soul gem. Ahead to the southwest are more stairs leading up to another area at the rear of the cavern. At the top is an unlocked chest and two heart stone deposits, one each to either side of the chest against the rear wall. In front of these deposits, two more leveled ash spawn rise from the ground.

From the chest, head north to the far wall to a third heart stone deposit; along the wall to the right of the deposit is an urn on a ledge above. Behind the urn, at the very back of the ledge is a skeleton with an ancient Nord helmet, a honed ancient Nord sword of cold, and a silver and moonstone circlet. Returning to the chest and facing east-northeast, there is a second chest on a raised platform around a stone pillar, which can be reached either from the edge at the top of the highest level using the Whirlwind Sprint dragon shout or by clever jumping and climbing. The chest is novice-locked, and has an apothecary's satchel beside it.