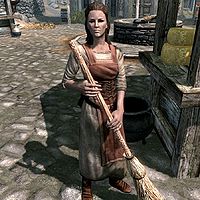 Carlotta Valentia is an Imperial food vendor who runs a stall selling produce at the Whiterun market. According to Severio Pelagia, most of her wares come from his farm.

She is the mother of Mila Valentia and often expresses her determination to not have a man come between her and the task of raising her daughter. According to her, she is seen as an object of desire among the men of Whiterun; supposedly she has had both single and married men in town propose to her. Mikael, a bard at the Bannered Mare, has recently been expressing a lot of interest in Carlotta, causing her to become quite annoyed with him. After hearing her complain about him, you can offer to take care of the issue and she will reward you with a leveled amount of gold if you get Mikael to leave her be.

She begins her day by waking up at 8am and immediately leaving her house to head to her stall in the Whiterun marketplace. She will then stand behind her stall, offering her produce to any potential customers. At 1pm, she will begin to sweep the area around her stall. She will spend three hours sweeping around her stall, still offering her services while she does this. At 4pm, she resumes her position behind the stall and will remain here for the next three hours. After a long day of serving customers, she heads to the Bannered Mare at 7pm. She will spend her time here eating and drinking with the other regulars of the inn. After spending three hours inside the inn, she leaves at 10pm to head to her house. She will then spend the next ten hours relaxing inside her home. She chooses to spend some of this time sleeping in her upstairs bedroom, but can also be found sitting within the house or using the cooking pot inside the home.

Carlotta wears a set of merchant clothes along with a pair of boots. She wields an iron dagger and carries a key to her house along with a selection of common items and gold. 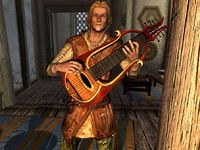 "That bard Mikael is begging for a dagger up against his throat, the way he goes on about me."

After hearing Carlotta talk about the bard that is the most annoying of the men that approach her, you can ask her if someone is bothering her:

"Life's hard enough with all these men propositioning me. But that bard is the worst."
Someone giving you trouble?
"That bard Mikael is begging for a dagger up against his throat, the way he goes on about me. I've heard him boasting at the Bannered Mare, saying he'll 'conquer me as a true Nord conquers any harsh beast.' Hmph."

Sorry to hear that.
"I can take care of myself. A Whiterun woman learns how to handle a few idiot men early in life."

What if I talk to Mikael?
"If you want to try, go right ahead. I don't think anything will get through that thick skull of his, though."

After you have dealt with Mikael and persuaded him to leave Carlotta alone, you can tell her that he will not be bothering her anymore, she will be quite happy to hear this:

Mikael won't be bothering you anymore.
"Really? You convinced that lute player to stop chasing me? I'd thank the gods, but I'll settle for thanking you. Here's some coin for your help."

When she is at her stall in the marketplace, Carlotta can often be heard advertising her merchandise, yelling:

"I hope you're looking at me like that because you want to buy something?"
"I've got a hungry daughter to feed, so selling my produce is really the only thing I care about."

When spoken to directly she can be asked questions about herself and her business:

You get a lot of attention from men?
"You've got no idea. Half the men in Whiterun have proposed to me. Some were even single. They'll never understand. No amount of flowers or honeyed words are going to change my mind. Right now, all that matters is my daughter Mila. No man's going to get between me and my little girl."

If the Stormcloaks have taken over Whiterun:

Have the Stormcloaks caused you any trouble?
"No more than I was already getting. Four of the guards have already decided they're in love with me. Two of the guards got into a fight over me at the tavern. At least Balgruuf's men bathed regularly. These Stormcloaks always smell of ale and sweat, and their breath reeks."

When she is at her stall, she may bid you farewell with:

"Remember, fresh fruit and vegetables every day. Mostly."
"Thanks for the business."

When she is inside her house, she will instead close dialogue with:

"I've really got to be going."
"I think I hear my daughter calling..."

Since Carlotta spends much of her time in the central marketplace area of Whiterun, she can be seen talking to a variety of different people.

She can be seen talking to her daughter about the family business: 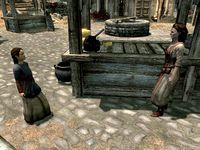 Mila: "Can you close up the stand early today, mama?"
Carlotta: "I'm afraid not, little fairy. The fruit has about another day left before it spoils. We've got to sell as much as we can, as soon as we can."
Mila: "That's what you always say."
Carlotta: "Because it's always true."
Mila: "Can we at least go to the tavern for supper?"
Carlotta: "Tsk. And to think, I was going to feed you cabbages and apples again. Yes, little fairy, we can go to the tavern for supper."
Mila: "Yay!"

She can often be seen dealing with the local beggar, Brenuin, who often pleads for Carlotta to give him some free food:

Carlotta: "How goes the begging today, Brenuin?"
Brenuin: "That's right, mock the town beggar like everyone else. But I've got a right to browse, don't I? I ain't hurtin' anyone."
Carlotta: "Make it quick, then. I don't want your stink driving my customers away."
Brenuin: "The gods smile on them who show charity. Best you remember that." 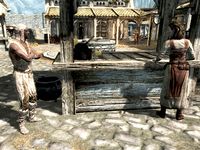 "If I have anything left that's not sold or spoiled, you can have it."

Carlotta: "And what might you be looking at?"
Brenuin: "Oh, the fruit looks so good. So juicy."
Carlotta: "No handouts today, Brenuin. Now scat. You'll scare off my paying customers."
Brenuin: "Oh, just one apple, Carlotta? Just one tiny apple. I'll pay you tomorrow, I swear it."
Carlotta: "That's what you said last week, and the week before that. Now go, before I call a guard."
Brenuin: "No, no! Don't do that. No need to do that. I'm going. See? I'm leaving. No guards, please."
Carlotta: "Look, come back tomorrow, okay? If I have anything left that's not sold or spoiled, you can have it."
Brenuin: "You've got the heart of Mara herself, you know that? Thank you, Carlotta. Thank you."

Ysolda can be seen giving Carlotta some business advice regarding her green apples:

Ysolda: "Those green apples you sold me the other day were delicious."
Carlotta: "Aren't they? I always set some aside for myself when the traders bring them up from the south."
Ysolda: "I'm sure you could charge double for those and still sell them all within a week."
Carlotta: "You're right. I'll have to remember that the next time I get a shipment in." 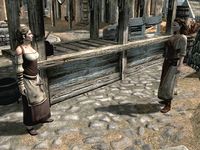 "Maybe I should sell swords and armor, instead."

Olfina: "Did you raise your prices, Carlotta?"
Carlotta: "I had to. The farmers are charging me double for the produce I sell."
Olfina: "Let me guess, they're saying it's because of this trouble with the Stormcloaks?"
Carlotta: "Exactly. Road patrols were cut in half because the Jarl needed soldiers. Now the bandits are bolder than ever. They've been raiding the farms for food, and supplies are scarcer than ever. Maybe I should sell swords and armor, instead."
Olfina: "Maybe, but they wouldn't taste as good as a loaf of fresh-baked pumpernickel."

She can also be seen receiving a complaint and suggestion from Nazeem:

Nazeem: "These fruits and vegetables are disappointing, Carlotta."
Carlotta: "I get them fresh from the farms daily, Nazeem."
Nazeem: "If you were getting them from my farm, they'd be twice as fresh."