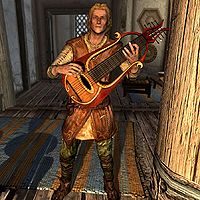 Mikael performing at the Bannered Mare

Mikael is a Nord bard performing at the Bannered Mare, and the author of A Gentleman's Guide to Whiterun. He believes himself to be quite enthralling to women and will remark: "Once Mikael gets them, they're got." He spends all his time at the inn, alternating between playing his instruments and chatting to any women present, whether they are single or married. His parting advice is that, "Women love sonnets." If your character is female, upon leaving a conversation he'll say, "It's the leaving that's hardest, I know."

When asked where he learned his trade, he explains that he studied at the Bards College, but had to leave due to a 'misunderstanding' with a headmistress and her husband. He is on friendly terms with his current employer, Hulda, and is also Ysolda's boyfriend.

He is attempting to conquer Carlotta Valentia romantically, though she has no interest in him. The player can help Carlotta out by persuading, bribing, or intimidating Mikael to convince him to abandon his pursuit of her, or by defeating him in a brawl. Killing him will cause the quest to fail and Carlotta will not talk about him again. It is not possible to help Mikael woo Carlotta.

He wears a set of farm clothes and boots. He carries an iron dagger along with a selection of common items and gold.

"If it's a lady you're looking for, you'd best look elsewhere. Once Mikael gets them, they're got."
"I'm a bard by trade. Perhaps you've heard of me?"
"I don't have much of a reputation in Skyrim yet, but I'm working on that, one sweet lady at a time. Haha!"
"No doubt they still tell tales of Mikael and his sweet songs across Cyrodiil, where last I traveled."
"I enjoy steady patronage in the Bannered Mare. I do hope you'll watch me perform."
"There was a great battle here in Whiterun. It was quite thrilling! I must compose a song about it someday."

Give me the latest gossip.

"The Companions? In Jorrvaskr? They're recruiting new members, from what I hear."
"I assume you saw the Gildergreen? Big tree, all burnt up, in the middle of the Wind District. It's part of the Temple of Kynareth. People want Danica to do something about it, but I don't know what they expect."
"Been hearing some strange tales of the Jarl's children. Say the one's turning wicked, and the others have an ill-favored look to them. Best to keep clear."

Mikael may talk with Hulda. They will choose between random lines:

You need to leave Carlotta alone.
"Carlotta put you up to this, didn't she? I'm sorry, but that fiery widow is mine. She just doesn't know it yet."