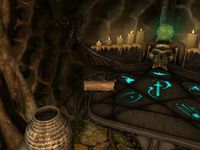 The Black Book needed to access The Hidden Twilight is found in Tel Mithryn. You must complete the Reluctant Steward quest to access it.

Chapter I opens in a dark empty room. On the raised platform are two fonts of magicka, and by the gate ahead, another font of magicka, and the scrye to open the gate. The following room has two fonts of stamina and the book to Chapter II. Hidden under the platform, accessed from the far side, is a pod.

To the right of the gate, following the walls, is a short tunnel leading to an open area. Across the water is an "island" that is Chapter VII. It is possible to reach this island with the shout Whirlwind Sprint, or by swimming using the Become Ethereal shout (and a few potions). From this island you can access Chapter VI, and then proceed to the end of the location. However, proceeding this way glitches Chapters II through V, blocking access to the five skill books in Chapter V.

Chapter II opens in a corridor. There are five fonts of magicka along the walls (including one behind the entrance), before it emerges into a large room. There are two seekers, two fonts of stamina, a font of magicka, and a random soul gem on a table. The path continues up a ramp located in the southeast corner of the room. At the top of the ramp is a font of magicka and a scrye. The scrye sets two bridges to rise and fall on either side of the platforms. If you mistime your jumps you will land on the lower platform, where a scrye opens a gate back to the first room.

To the left is a treasure room, containing a font of magicka, a pod, two soul gems (one grand and one random), and the Spell Tome: Conjure Seeker (only if your conjuration skill is at level 40). The path to the right leads to a font of magicka and the book to Chapter III.

Behind the entrance is a font of magicka. There is a font of stamina around the other side of the pillar, and a font of magicka outside the first part of the Chapter. There is a pod to the left of the exit. To either side, outside, are ramps looping up to a scrye. The scrye extends some stairs lower down, giving access to the raised platform in the middle of the area. There is a seeker here, and a lurker in the rooms ahead. There are also three soul gems on the tables (two random, and one leveled) on the platform.

Through the first gate is a font of stamina, and a font of magicka by the second gate. To the southwest is a set of stairs which leads past a font of stamina to a scrye, which opens the second gate. There is a seeker patrolling the corridors here, which ultimately lead to a pod in what appears to be a dead end. However, the corridor extends to reveal the books for Chapters V and VI. Chapters IV and V can be skipped entirely, they combine to give access to a treasure room with five skill books.

Chapter IV is extremely basic, and is in the same place as Chapter V. It is a small room with a seeker, a font of magicka, and a scrye, which opens a gate in Chapter V.

Chapter V opens in a small room. There is a scrye and a font of magicka. The scrye opens the gate but you cannot progress further until you visit Chapter IV. Once you have a seeker will be in the room. Dispose of it and find the loot, which includes a pod, and five skill books, one for each of the spell-casting skills. They are: 2920, Hearth Fire, v9 (Conjuration), A Hypothetical Treachery (Destruction), Before the Ages of Man (Illusion), Breathing Water (Alteration), and Racial Phylogeny (Restoration).

Chapter VI is another extremely basic area. There is a font of magicka behind the entrance, and a font of stamina at the end, above the books to Chapters VII and VIII.

Chapter VII is another small area. There is a seeker, a font of magicka, a scrye, and a table with random two books. The scrye raises a bridge in Chapter VIII, which is visible to the north. 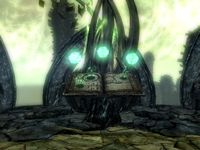 Chapter VIII opens in a room with a few pillars. Behind the pillar to the left is a table with two soul gems (one black and one grand). There is a bridge that requires a visit to Chapter VII to raise. Atop the bridge is an area where two lurkers spawn. The Lurkers will not follow you over the gap in the bridge, and retreating past it will allow you to wear them down with arrows or spells while avoiding their melee attacks. There is also a scrye to open the gate forward. Through the gate is the final area with loot and the book The Hidden Twilight. The loot contains a vessel, four soul gems (two black and two grand), and three scrolls (a scroll of ebonyflesh, a scroll of grand healing, and a scroll of paralyze). To exit this part of Apocrypha, use the non-circular part of the black book.