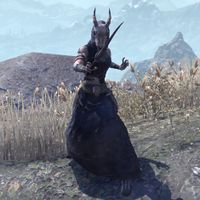 Reach Mages are a class of hostile humanoid NPCs that attack using ranged magic. They are usually equipped in light armor and usually wield a single sword or dagger, though some can be seen using a destruction staff.

A basic ranged attack that does minor flame damage.

The enemy channels magic and releases a gout of flame from their hand, which they sweep slowly in front of them. This attack does moderate flame damage to all players hit by it. This spell can be interrupted to set the enemy off balance or simply avoided.

The enemy sets an AoE down that explodes into flaming vines. The blast does minor flame damage.

Standing in the AoE placed by Grasping Vines inflicts minor magic damage over time from the writhing vines that emerge after the explosion.

This Elder Scrolls Online-related article is a stub. You can help by expanding it.
Retrieved from "https://en.uesp.net/w/index.php?title=Online:Reach_Mage&oldid=2365147"
Last edited on 18 March 2021, at 01:32