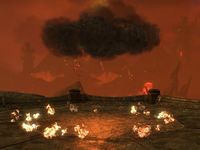 Elemental Storm causes a storm over a spot on the ground which deals Fire, Frost, or Shock Damage to all enemies for 10 seconds. There is a 2 second delay before the storm begins, so prepare to keep the targets in range of the effect when you cast it. The Eye of the Storm morph eliminates this drawback by centering the effect around you, so you can move around with it to keep your targets within range. Or you can use the Elemental Rage morph, which adds different bonuses depending on the type of staff you have equipped: Inferno Staves will increase the damage, Ice Staves will immobilize enemies, and Lightning Staves will increase the duration.

2.6.4
* New Weapon Ultimates have been added to the game. Each Weapon skill line now has one Ultimate, and each Ultimate can be obtained by reaching Rank 50 in its respective Weapon skill line. Weapon Ultimates can be morphed as well!
2.6.11
* Eye of the Storm:
2.7.5
* Fixed an issue where this ability and its morphs could occasionally cause your ground-target reticle to become stuck and prevent you from using other abilities.
3.1.5
* In an effort to reduce the visual effect noise in group combat situations, we've hidden most visual effects from persistent damaging area of effect abilities cast by your allies. Area of effect abilities that have a synergy, healing, or defensive component that can benefit you will still be visible, and area of effect abilities cast by enemies will also still be visible.
3.2.5
* Reduced the damage of this ability and the Eye of the Storm morph by approximately 12%. The damage on the Elemental Rage morph remains unchanged.
3.3.5
* Reduced the radius of this ability and its morphs to 8 meters from 10 meters.
4.0.5
* Elemental Rage: Fixed an issue where Fiery Rage was not increasing the damage dealt by this morph by 10%.
Retrieved from "https://en.uesp.net/w/index.php?title=Online:Elemental_Storm&oldid=2682534"