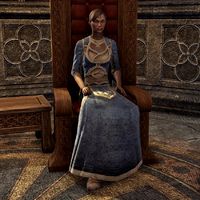 Duchess Lakana is the wife of Duke Nathaniel and one of the youngest daughters of King Fahara'jad. A military force sent by her father from Sentinel has entered Stormhaven and set up camp outside Alcaire Castle, demanding to be allowed to meet with her. Some Bretons were already opposed to her arranged marriage to the Duke, and so the arrival of Redguard troops has become a source of tension within the Daggerfall Covenant.

When she is first approached in the Alcaire throne room:

"I hope you forgive us for not offering a more friendly welcome. The affairs of the region weigh heavily on my husband's shoulders.
There are also concerns about security here in the castle. You really should speak with Sir Hughes."

After completing Army at the Gates Lakana can be found upstairs in the castle with Darima.

"Darima told me you spoke to Sir Hughes about Dame Falhut. Thank you.
You don't know what a relief it is to have her here. I am an outsider in Alcaire Castle, with no one I can fully trust. Sometimes, I even wonder if I can trust the duke."
Why is that?
"Because there have been several attempts on my life, all from someone within these walls.
An Alik'r poison intended for my lips killed one of my tasters just a few days ago."
Why would someone want to kill you?
"There are many rivals for the throne in Alik'r. They despise the Covenant, and they would kill me to destroy it.
My father has been trying to identify the assassins. I must speak with General Thoda at the camp outside, but I am forbidden."

If you wish, I could be your messenger.
"Can I trust you? You did intercede on our behalf with Sir Hughes ….
Very well. But General Thoda will not expect you. You will need to get his attention. It may be difficult, but if you could best some of his warriors, he will want to see you."

I'll get General Thoda's attention.
"Thank you. Things are truly desperate when a daughter of King Fahara'jad must rely on the generosity of a stranger, but I do believe in you.
The future of the Covenant—and my life—depends on you. Ruptga go with you, friend."

Why not send Envoy Darima?
"Because Darima is the only one in the castle I can fully trust.
I need her here, and I fear that if she leaves, they may not permit her to return."

Speak to her again and she'll divulge more information:

"Be cautious in Thoda's camp. It's full of young Redguards who want to prove themselves. Do what you must to prove your mettle, but don't spill any blood if you can avoid it.
We have to avoid starting a war."
What about the redguard army? Why are they here?
"I can only tell you what Darima told me. My father insisted Darima have a larger-than-usual armed escort. It's not the invasion everyone makes it out to be.
I can almost understand their paranoia. Perhaps it is partly my fault."
How is this your fault?
"I've tried to protect myself, but that's only raised suspicions within these walls.
I … cannot speak more of this. Know that the rumors are not true. My father's soldiers do not seek dominion or conquest, only my safety."

Returning after speaking with General Thoda:

"It is a relief to see you returned. I fear I might have asked too much.
Tell me though, did General Thoda have any new insights into source of these assassinations attempts?"
Dame Falhut purchased the poison.
"What? The Knights of the Flame are sworn to protect me. Why would one try to take my life?
I know Dame Falhut spoke out against my marriage to the duke. I can't imagine how that could motivate her to murder."

If you haven't started the quest, she will say "Sir Hughes should know about Dame Falhut's betrayal."

"I hope Dame Falhut was acting alone in this.
If there is a wider conspiracy, I fear for what that might mean for our future."
General Thoda suggested you leave the castle.
"No. This will not do. To run would be to surrender to this madwoman's hatred. Falhut is the one who must pay.
Though I don't always agree with him, Sir Hughes is a good man, and I trust him. Tell him of Falhut's betrayal. He will see justice served."
Stay here. I'll find Sir Hughes.
"I can't believe my suspicions were so far from the truth. The assassin being a Breton only makes this situation more volatile.
Please, tell Sir Hughes and ask him to resolve this matter swiftly."
Why is it more volatile?
"Because it has greater potential for destroying the Daggerfall Covenant.
My choice to go to my father for help rather than the Knights of the Flame only made matters worse. I'm sorry for that now."
But that's how you learned it was Dame Falhut.
"Indeed, but perhaps it would have been better if Sir Hughes had uncovered that truth ….No time for regrets though.
We will do this properly now. Let Sir Hughes handle it. It is what's best for the Covenant."

Enter the Duchess's room and you'll witness a gruesome scene:

"<This body is still warm to the touch. The blade in its back bears the sigil of the Knights of the Flame. This weapon obviously belonged to Sir Hughes.>"

A memory of Duchess Lakana's last moments can be viewed within Sir Hughes' dream.