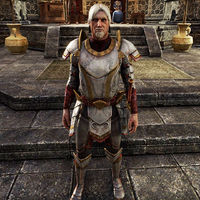 Sir Hughes is a Breton who can be found at Alcaire Castle. He is the leader of the Knights of the Flame and protector of the Duke and Duchess of Alcaire. Haunted by dreams of betrayal, Sir Hughes fears that the Redguard army that arrived at the castle is planning an attack. He is determined to protect Stormhaven at all costs even if means being suspicious of his own allies.

If he is approached before starting the quests at Alcaire Castle, he will apologize as he is far too busy to speak with you.

"I'm sorry. We have a crisis unfolding at the castle gates and I simply cannot waste time in idle conversation right now.
I hope you understand."

When first approached during the Army at the Gates quest: 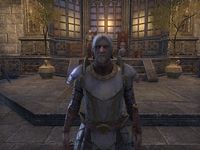 "You're welcome to Alcaire Castle. I'm sure you noticed King Fahara'jad's army camped outside our walls. So you can understand why Duke Nathaniel is not entertaining guest.
I should hope you're not here to add to our troubles."
I might be able to help.
"Ha ha! Don't hear that too often, but it's most welcome. If blood gets spilled here, it could destroy the fragile alliance holding together the Daggerfall Covenant.
We need to defuse the situation as quickly as possible."
Letting the Redguard envoy in would be a good start.
"Damn it! Dame Falhut is holding the envoy up at the gate, isn't she?
Never questioning orders is Falhut's strength and her weakness. I'll have to send word to make an exception.
Meantime, I actually have a task you'd be well-suited for."
Great. What can I do?
"It's a … sensitive matter. We've intercepted secret messages to King Fahara'jad from someone inside the castle who goes by the alias of "Almandine."
My hope is that a little research in the library might reveal where this term comes from."
All right. I can check the library.
"Unfortunately, the duke requires that he personally approve all visitors to the library, and he can't know about this.
The library guard—Sir Gregory. Perhaps you can persuade him to look the other way, or failing that, to leave his post."
I'll give it a try.
"Again, you must keep this quiet. The Duke is already overwhelmed and hearing about a spy inside the castle might push him over the edge.
Get past Sir Gregory and into the library, find out who "Almandine" is, and report back to me personally."

What does the Duke plan to do about the Redguard army?
"For better or worse, the Duke defers to me on the matter for now. Nathaniel shares King Emeric's bloodline but not his talent for calm under pressure.
Of course, the Duke's wife being King Fahara'jad's daughter doesn't make matters easier."

The Duchess is from Alik'r?
"Indeed. Duchess Lakana is one of King Fahara'jad's youngest daughters. They say he was quite fond of her.
She doesn't speak of her father much, but I think those ties run deeper than she lets on."

Can't you order Sir Gregory to let me into the library?
"I cannot defy the Duke's orders—not with an army at the gates. You can.
One thing that might help—Sir Gregory is insanely jealous of his wife. In his mind, she would be the sheath to every knight's blade.
You didn't hear it from me."

Speaking to him if you got past Sir Gregory but haven't found out the identity:

"How goes the search? Have you discovered anything yet?"

Speaking to Sir Hughes after finding out the identity of Almandine:

"Sometimes, a true knight must undertake a mission that requires reading books rather than slaying monsters. Such is what I asked of you.
Did you learn anything in the library?"
"Almandine" is Duchess Lakana herself.
"I feared as much. We have to proceed carefully now.
We don't want to alert the duchess or King Fahara'jad to the fact we know about the secret communications."

If you haven't start the quest, he will remind you "Remember, keep this quiet. Just between the two of us."

"I hate to say it, but I'm going to have to speak to with the duke about this. The fact that the duchess is sending secret letters to her father is serious cause for concern.
We need to know exactly what they're planning though."
What do you propose?
"After speaking with King Fahara'jad's envoy, Duchess Lakana asked to go out and negotiate with the Redguard general herself.
Clearly, we can't allow that, but the duchess is refusing to let the envoy leave to deliver her message."
I could deliver the message.
"My thoughts exactly. And in so doing, you would win her confidence.
You already helped get the envoy through the gates, so Lakana will be inclined to trust you. Go speak with her upstairs. Do whatever you must to learn her plans.
I'll report back when I know more.

"The duchess is likely in her chambers upstairs. For now, just try to win her confidence. I must speak to the duke before we take any drastic actions.
If you learn any more about her plans, though, let me know right away."

Returning to speak to Sir Hughes during Life of the Duchess

"I trust you've earned the duchess's confidence by now. That's good.
Have you been able to learn why she was conspiring with her father?"
Yes. She feared for her life.
"After the attempt on her life, that makes sense, but why go to her father? The Knights of the Flame are here to protect her.
That makes no sense. Why would he send an army here? The assassin's poison came from Alik'r—the duchess said so herself."
Yes, but it was Dame Falhut who purchased the poison.
Dame Falhut? Are you … are you certain? That's a grave accusation. Of course, she was opposed to the marriage.
We'll have to question her, but sending a Knight of the Flame to apprehend her might not be wise."
I can do it.
"I was … hoping you might volunteer. That would help … avoid a scene.
Falhut's home is north of the inn. If you'll go there first, I'll get some of my men and come as back up."

"Dame Falhut lives in the house just north of the inn. For now, I just need you to go there and make sure she's not about to engage in any more rash behavior.
I'll get my men and meet you there shortly to take her into custody."

"Where's Falhut? Did she run?"
No. She attacked. I killed her.
"I'm … sorry to hear that.
You did what had to be done, and I suppose her reaction merely proves her guilt."

Before you start the quest he will urge to speak with you a hushed tone "There's something we need to discuss. Privately."

After completing Life of the Duchess and starting Safety of the Kingdom:

"I wish I could say there was no longer cause for concern. Somehow, though, I just don't think that's the case.
Something about all this just isn't adding up."
I agree. It's hard to believe Falhut was acting alone.
"Indeed. I would very much like to discuss this with you further—but not inside the castle.
My home is past the market. If you'll give me a moment to settle matters here and check on the duchess, I'll meet you there and we can talk."
I'll see you soon

"My house is just past the market. It's the only place I'm sure is safe enough to have this discussion.
I'll be there as soon as I've settled matters here." 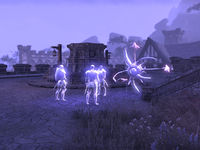 Sir Hughes with the Omen of Fear

While in Sir Hughes dreams during Sir Hughes' Fate, he can be seen conversing with two Knights of the Flame and the Omen of Fear:

The scene will fade away after this. You will later see him in another vision near the fountain at the front of the Keep, this time including Sir Croix:

The real Sir Hughes will then interject:

Sir Hughes:"What have I done?"

Speaking to the real Sir Hughes within his dream:

"I killed her. She deserved it, didn't she?
I know she did, or I think I know...is this real?"
This is a dream.
"No. It's an never-ending nightmare, whether I sleep or not. I killed Duchess Lakana.
The Omen whispered in my mind, poisoning my thoughts. Now it tortures me, forcing me to watch the murder again and again....:
Who or what is the Omen?
"The Omen of Fear! Always with me. Always whispering. Telling me about the Redguards, about Lakana.
I believed it, but it was lying. I murdered an innocent woman and betrayed the Duke. Now it's hiding, but it's not gone.
How can we stop it?
"We have to kill it. You have to kill it.
My sword! In the dream, I left it in the throne room, The Omen is drawn to it. Find the sword and find the Omen."

After killing the Omen of Fear:

"You killed the Omen. may the Eight bless you.
My mind is free..but my sins remain."
Are you all right?
"Yes, I'm all right...but not absolved. I ordered the Knights of the Flame to rebellion. I murdered the duchess. I betrayed the duke.
These stains on my honor cannot be washed away."
Let's leave this nightmare.

Speaking to Sir Hughes while deciding his fate:

"The Duchess died by my hand. My crime is unforgivable, and I accept full responsibility.
Do what must be done."

If you decide to have him executed, you'll hear:

Duke Nathaniel: "Then Sir Hughes will have his wish and Lakana will be avenged. Go ahead, Sir Edmund."
Sir Edmund: "Forgive me, my old friend."
Sir Hughes: "One clean blow. Strike swiftly now."
<Sir Edmund strikes and kills Sir Hughes>

If you decide to let Sir Hughes live, you'll hear:

Duke Nathaniel: "Very well. Thank you for your counsel."
Sir Edmund: "Rise, old friend. You will not die this day."
Sir Hughes: "Then my punishment is living in disgrace."

Speaking to Sir Hughes while he's crying if you decide to spare him:

"I fear that justice would have been better served by my death.
I pray your judgment does not prove to be a mistake for the future of the Covenant."

Inside Emeric's Dream, you'll encounter a hostile version of Hughes: