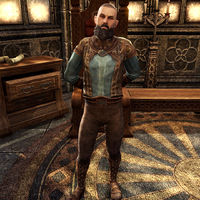 Duke Nathaniel is a Breton nobleman who rules the duchy of Alcaire, a land that covers much of western Stormhaven, including Koeglin Village. Duke Nathaniel helped to cement the Daggerfall Covenant through a political marriage to Duchess Lakana, the daughter of King Fahara'jad.

When he is first approached in the throne room of Alcaire Castle:

"Tell me you don't come bringing more bad tidings. I've already heard about the slavers on the shore and the cultists in the hills.
I don't mean to be rude, but I have enough concerns. It's probably better if you speak to Sir Hughes."

The Safety of the KingdomEdit

The Duke can be found at the side of Duchess Lakana upstairs, he says the following:

"Why would someone do this? Where were the Knights of the Flame? Why weren't they protecting my wife?
There must be something … anything … that will explain this. Search the castle!"

Once Lakana's body is searched:

"She cannot be dead. This cannot be real. My Lakana ….
You! You spoke with her, didn't you? What do you know of this? Tell me!"
Sir Hughes is responsible for this.
"Sir Hughes? Was he mad? He was supposed to protect her! How will I explain this to Lakana's father? To her sister?
Lakana would never hurt anyone. She was innocent … my beloved wife."

If you haven't start the quest, he will vow "Sir Hughes will pay dearly for what he has done!"

"I don't understand. Sir Hughes served me for so many years. Loyally. Faithfully.
Why would he murder my wife?"
His dreams suggested Lakana would destroy Alcaire Castle.
"Dreams? That maniac murdered my wife on the basis of a dream? He will die for this!
You must help me find him. He's probably gone to Firebrand Keep. Please, do it for Lakana. Find Hughes and kill him!"
I'll find him, Your Grace.

He will be angry when spoken to:

"The Knights of the Flame are sworn to protect me and my family. How can I trust any of them now?
Firebrand Keep is to the southeast. Go and bring Sir Hughes to justice. Let none stand in your way!"

Duke Nathaniel can be found in the keep after you leave Sir Hughes' dreamscape.

"Sir Edmund sent for me, and I came as soon as I could.
Sir Hughes does not plead for clemency, yet he says his mind was not his own?"
He was under the influence of a Daedra, but it's dead now.
"As strong as my anger may be, I sense truth in your words, and some change in Sir Hughes' character.
But he murdered my wife, and for that, I can find no forgiveness."
Then you will have him executed, Your Grace?
"He asked me to take his life and restore honor to the Knights of Flame, but my emotions are too strong. I cannot trust myself to make the right decision.
You were in his dream. You saw what drove him to murder. You must decide his fate."
Let him live. He wasn't in his right mind. (Mercy)
He should die for murdering an innocent woman. (He is executed)

If it is decided that Hughes' should be executed then the following is said:

Duke Nathaniel: "Then Sir Hughes will have his wish and Lakana will be avenged. Go ahead, Sir Edmund."
Sir Edmund: "Forgive me, my old friend."
Sir Hughes: "One clean blow. Strike swiftly now."
<Sir Edmund strikes and kills Sir Hughes>

If you decide to let Sir Hughes live, you'll hear:

Duke Nathaniel: "Very well. Thank you for your counsel."
Sir Edmund: "Rise, old friend. You will not die this day."
Sir Hughes: "Then my punishment is living in disgrace."

Speak with him to end the quest.

"I cannot allow one who committed so grevious [sic] a crime to ever serve me again."
What happens now?
"Sir Hughes may live, but he will never stand in my court again.
I hereby strip him of his knighthood. I exile him from Alcaire. He may never return, upon penalty of death. He faces a kinder fate than the one that befell my wife."

If you speak to him after the quest, he says:

"If I could trade my life to bring back my dear Lakana, I would. Moving on will not be easy, but I must honor her sacrifice by doing all that I can to protect the Covenant.
I will speak with King Fahara'jad. Perhaps we can come together in mourning."

If you haven't start the quest, he will say "There's more to discuss, we must investigate it further."

Upon the conclusion of the previous quest, you can speak to the Duke again:

"If I could trade my life to bring back my dear Lakana, I would. Moving on will not be easy, but I must honor her sacrifice by doing all that I can to protect the Covenant.
I will speak with King Fahara'jad. Perhaps we can come together in mourning."
Is there anything more I can do, your grace?
"Though the immediate danger is past, I fear this might be more than an isolated event. Sir Hughes driven mad by nightmares, and I've heard the constable in Koeglin Village was similarly affected.
We need to know more about this so-called 'Omen.'"
Where would I find such knowledge?
"The Spirit Wardens of Pariah Abbey. They dabble in daedric rituals, but they are benevolent.
Speak to Brother Muran at the abbey. Ask him if the appearance of this Omen should be cause for wider concerns. If so, we should warn High King Emeric."
I'll find Muran

"I must return to Alcaire Castle and attempt to set matters straight there, but I will be anxious to hear what you learn.
I hope you find answers at Pariah Abbey."

After Vaermina's Gambit, the Duke can be found in the throne-room along with some of the Knights of the Flame. His dialogue differs depending on previous choices, if Sir Hughes was executed:

"Thank you for saving my brother. To know that Sir Hughes is dead and that Vaermina's plot here was thwarted gives me much peace.
I still mourn the loss of my sweet Lakana though."

"So the true culprit behind Lakana's murder was indeed Vaermina? I'm glad to know her plot against my brother was ultimately thwarted.
I'm glad we spared Sir Hughes as well. I understand he's doing penance at Pariah Abbey."