Online:Dousing the Fires of Industry

Quintia Rullus, a former Legionary engineer, wants to slow down the bombardment of Imperial City from the Elven Gardens District. 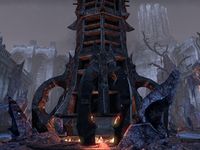 At your Alliance Rally Point in the Elven Gardens District, you will find an Legion deserter named Quintia Rullus. She will rather promptly enlist you in her efforts to halt the destruction of the Imperial City by Legion Zero's siege weaponry.

Firstly, she will charge you with burning down four of the newly-constructed ballistae, which display the face of "Boney-Bal" on the front. This objective will place you in direct competition with other players, including enemy alliances. The generic catapults will not work for this quest; only the weapons with map markers can be burned.

After burning the required number of ballistae, you'll need to find a Barrel of Tar. These items can be found in a storage room marked on your map, and obtaining one will again put you at odds with other players. It would be wise to approach the building carefully if there are enemy players doing the quest. Once you've obtained a barrel, bring it to the Great Forge near the sewer grate. The area is heavily guarded by enemies, including the Xivkyn Kazarvel Scathe-Knight.

Once you've knocked the forge out of order, return to your Alliance base (either through the sewers or through respawning/teleporting) and locate Quintia in the crafting area. She will reward you with leveled gold and a Light Tel Var Satchel.