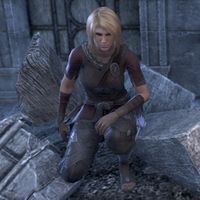 Quintia Rullus is an Imperial engineer and Legion deserter found in the Elven Gardens District of the Imperial City.

You'll find her in the Elven Gardens District, where she acknowledges you, "Hey, you here to cause trouble too?"

The first time you meet her, she'll greet you as follows:

"They're industrious, I'll give em that. Take a look at all those siege engines. Even took the time to chisel 'old Boney-Bal's face onto them! Pity we've got to burn 'em down. You are going to help me burn them down, right?"
Excuse me?
"The ballistae! We've got to cull the herd a bit, or there won't be a city left to save, yeah?
I know they look all dark and spooky, but they burn well enough. Trust me. Put a few to the torch. That'll put a bee up Legion Zero's britches."
Is that all?
"Nah, we can do better! These louts have a stockpile of tar tucked away near the thoroughfare crossing. Least I think it's tar. Lots of foul, black liquids around here.... Pour it into that huge forge in the west quarter. That'll really turn heads!"

Speaking with her after having finished her quest at least once:

"Look who's back! The Legion's got more ballistae, ready to move up when they wear the old ones out.
You ready to stick another thumb in Molag Bal's eye?"
You want me to burn ballistae and ruin the forge again?
"See? I knew you'd be up for it! I'll mark where the new ballistae are being kept.
Be careful out there. They've probably caught on to our game by now. Or not …. Guess we'll find out, ay?"
I'll meet you when it's done.

After accepting the quest, you can ask her some questions:

"Well, what are you still doing up here? Those ballistae aren't going to burn themselves."
Are you a soldier?

"Was. Served in the engineering auxiliary in the Fourth Legion.
It was fun for a while. Got to operate the trebuchets - blow things up and such. But then there was all the drilling, and waking up early... Wasn't for me."
So you deserted?

"Well, that's an ugly word for it, but yeah. Worked out though, right? If I had stuck around, I might have wound up all glowy-eyed and evil!
The moral is, don't ever let anyone tell you that quitting won't get you anywhere."

Why haven't you fled the city?

"And miss out on all of this?
I'm kidding, of course. This place is the worst - but I can't just leave. The Imperial City is my home. No way am I going out into the provinces to milk goats or shave chickens, or whatever it is you do out there."

Once you have finished sabotaging the forges, you can return to Quintia who has moved down into your base:

"Well this place is homey if, you know … you're a half–starved skeever. You finished causing a ruckus up in the districts?"
Legion Zero won't be making any new siege engines for a while.
"I knew you could do it! I wish I could see the look on their smug, glowy-eyed faces. Priceless! I'm going to gather some supplies. Should be headed back out there in a day or so. If you're looking to cause a little more havoc, meet me there."

Speaking to her in the sewers after completing her daily quest:

"Didn't think I'd miss the smell of ash and burning pitch, but … yeah. Smells like an Ogrim's loincloth down here."
Why haven't you fled the city?
"And miss out on all this?
I'm kidding, of course. This place is the worst—but I can't just leave. The Imperial City is my home. No way am I going out into the provinces to milk goats and shave chickens, or whatever it is you do out there."