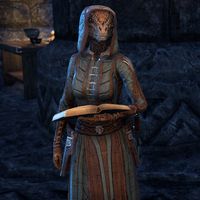 Deechee-Noo is an Argonian member of the Mages Guild who can be found at the branch in Orsinium.

Following the recovery of a totem from Coldperch Cavern, that Kraala Birdsong used to turn Winterborn into birds, you speak with Deechee to see if there's any way to reverse the transformation. Luckily, she believes there is a way and tasks you with obtaining three items from specific merchants to help perform the ritual with. She is able to perform the ritual successfully, although she wonders whether leaving the feathers on them would have kept the now naked Winterborn warm.

You must approach Deechee-Noo after taking the bird totem from Coldperch Cavern.

"Hmm. I smell something intriguing. Something... interesting...
Wait. No. Don't tell me. It smells like... it smells like... a dead bird?"
That's this bird totem. A hagraven used it to turn people into birds.
"A bird curse? Very unusual. Very rare.
But I have read about hagravens inflicting such curses on innocent people. Hagravens can be cruel and uncaring creatures. What a shame about the poor people that were transformed."
Is there any way to reverse the curse?
"Reverse the curse? What an intriguing concept! I don't know. There may be a way.
There's a book around here somewhere that refers to such things. But breaking a curse requires specific ingredients. Would you be willing to obtain such items?"
What do you need to reverse the curse?
"Oh, just a few items related to the curse. Let me think...
Ah, yes. A potion of feather plucking. I know Telarnel has one. And an ancient wing bone. I saw one at Rasna's stall. Oh, almost forgot! A frozen egg. Nednor always has one lying around."
I'll return with the items as soon as I can.

You can speak to her for more information on the items:

"Go on now. Hurry, hurry. Retrieve the potion and the wing bone. Oh, and the egg, of course. Mustn't forget the egg!
I'll be upstairs, researching the ritual. We'll conduct it up there when you return."
Can you tell me more about the items you need to reverse the curse?
"Oh, yes, of course! I apologize. I often forget that not everyone knows as much as I do about so many interesting things.
What do you want to know more about, hmm?"

Tell me more about the potion.

"A potion of feather plucking. The perfect concoction for quickly removing feathers from a chicken or other type of poultry - even those burdened by a bird curse.
Telarnel in the alchemy shop is sure to have one. Tell her I said hello!"

Tell me more about the wing bone.

An ancient wing bone, preferably from a prehistoric snow owl or an extinct flightless desert hawk, but any old bird will probably do.
Rasna over in the marketplace is sure to have something we can use. Just remind her she owes me a favor."

Tell me more about the egg.

"A frozen egg! Can't perform any ritual of consequence without one of Nednor's frozen eggs! And they taste so delicious. Utterly sublime!
Nednor has a stall in the marketplace. Just tell him it's for me. I'm his best customer!"'

When you've acquired the items and have returned to her:

"Ah, you've returned! How wonderful to see you again.
Tell me, were you successful? Did you acquire the items I asked for? Did you get the frozen egg?"
I acquired the items you requested.
"Excellent! Then we're almost ready to begin the ritual.
I just need a moment with this delicious frozen egg."
I'm ready. Let's start the ritual.

She will eat the egg and then start the ritual:

Deechee-Noo: "Frozen egg. So crunchy. So delicious. Now let's perform the ritual."
Deechee-Noo: "Let's see. We put the totem and the ancient wing bone in the pot. Then we add the potion."
Deechee-Noo: "Stand back now. Here comes the good part."
Deechee-Noo: "Perfect! Just like the book described! I believe the curse has been reversed."

Once the ritual is complete, you must speak with her again:

"Ah, frozen eggs! So crunchy and cold! Yum!
And I'm certain that the ritual was a success. The hagraven's curse has been reversed. Another satisfying affair, if I do say so myself!"
Are you sure the ritual worked?
"Oh, almost certainly. I'm sure that dozens of naked people just fell out of trees somewhere in the wilderness.
They're probably cold, though. Maybe I should have omitted the potion of feather plucking. Left them with something to keep them warm."

If spoken to again, she'll ruminate on what partner to take that night:

"Well, now that we're done with this curse business, I have a very important social engagement to prepare for.
But whose turn is it tonight? Is it Nednor? Maybe Telarnel? Ah, well. I'm sure one of them will be happy to see me!"