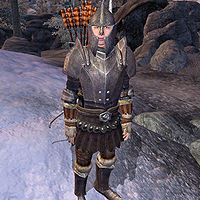 A Forester inspecting his prize

Occasionally, if you venture out into the wilds, you'll encounter an Imperial Legion Forester. All of the Foresters are Imperial men and are usually hunting deer on foot. They are all equipped with a silver bow and steel arrows and wear varying combinations of fur, leather, and Imperial Legion armor. They will comment on the weather if you talk to them. A total of thirteen Foresters (four variations) can be found in the game.

The only topic generally available when you talk to them is "Rumors", though other topics such as "Gray Fox" or "Prophet"KotN may appear at the appropriate points of various quests. Apart from that, Imperial Legion Foresters will treat you like any guardsman, meaning they'll attack you if you've got a price on your head. So if you're ever on the run, be careful if you decide to venture into the wilderness, because you just might end up being pursued by one of these guys. They'll give you the standard options of "Pay Gold", "Go to Jail" and "Resist Arrest" if they catch you.

When approached, a Forester may respond, "Shhh! You'll spook the deer!" 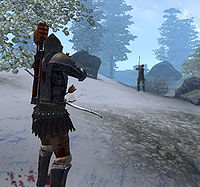 Imperial Legion Foresters attacking each other
Retrieved from "https://en.uesp.net/w/index.php?title=Oblivion:Imperial_Legion_Forester&oldid=2331587"
Last edited on 17 January 2021, at 04:13