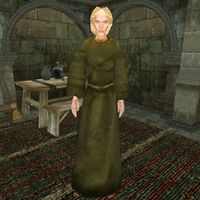 Ygfa is a Nord healer serving the Imperial Cult at Fort Pelagiad. She sells ingredients, potions and spells to all who need them. Ygfa is one of the people you can speak to if you wish to join the Imperial Cult. If you finished The Silver Bowl quest, she will make you a member of the Cult for free. If you are a member, you can ask her for a promotion if you've earned it.

She is somewhat involved in The Silver Bowl quest, during which she will tell you where to find the bowl's proper owner, although the quest can be done easily enough without ever speaking to her. Ygfa is also very knowledgeable about all manner of magic as well as the various diseases you may encounter in Vvardenfell. Ygfa is a restocking vendor for the following ingredients: Ash Yam, Bittergreen Petals, Chokeweed, Guar Hide, and Marshmerrow.

"Blessings of the Nine, %PCRank %PCName. Did you wish to barter for potions and other goods? Or do you hope to learn a new spell?"

"My friend, Piernette Beluelle, had a silver bowl stolen. This must be the same one. You must go speak with Piernette. Best if you start from a familiar landmark -- the north entrance to the Foreign Quarter of Vivec. Due north from the bridge to the Foreign Quarter of Vivec is an east-west rope bridge across a lagoon. Cross the bridge east, then follow the path as it heads north. You'll pass Nilera's farmhouse on the left, and the next house north will be Piernette's farmhouse."

If you returned the bowl to Beluelle:

"I hear you returned the bowl that was stolen from Piernette and Armond Beluelle. That was very good of you."

If you refused to hand back the bowl:

"I heard how you treated my friend Piernette Beluelle. It's disgraceful. You should give her that bowl."

Ygfa has the following spells available for sale: