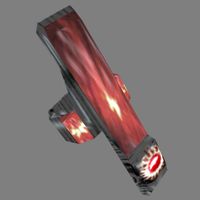 The Warlock's Ring of the Archmage Syrabane is one of the most popular relics of myth and fable. In Tamriel's ancient history, Syrabane saved all of the continent by judicious use of his Ring, and ever since, it has helped adventurers with less lofty goals. It is best known for its ability to reflect spells cast at its wearer and to improve his or her speed and to restore health. No adventurer can wear the Warlock's Ring for long, for it is said that the Ring is Syrabane's alone to command. —Yagrum Bagarn, Tamrielic Lore

The Warlock's Ring is a legendary ring which Ajira, in the Balmora Guild of Mages, will tell you about, but only after you have found the Staff of Magnus.

The ring is currently held by Vindamea Drethan in Ashirbadon, a cave on a small island east of the ruins of Bal Fell, just east of the city of Vivec at the bottom of the map.