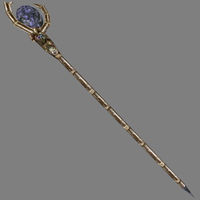 The Staff of Magnus, one of the elder artifacts of Tamriel, was a metaphysical battery of sorts for its creator, Magnus. When used, it absorbs an enemy's health and mystical energy. In time, the Staff will abandon the mage who wields it before he becomes too powerful and upsets the mystical balance it is sworn to protect. —Yagrum Bagarn, Tamrielic Lore

It is carried by Dreveni Hlaren in the cave of Assu, in the mountains northwest of Molag Mar.

Ajira gives you a quest to find this staff after you reach the rank of Warlock in the Mages Guild.