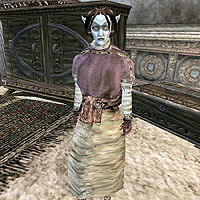 Tuveso Beleth is a Dark Elf smith in the Redoran Council Hall in the Manor District of Ald'ruhn. She is an Oathman in House Redoran. To find her shop, enter the Redoran Council Hall through the left door. Her smith shop and home will be right across the entrance on the first floor. She wears a common shirt, a common skirt, common shoes, common pants and common gloves. Aside from her natural resistance to fire and the sanctuary provided by her ancestors, she knows no spells.

Speak with Tuveso Beleth to receive your first duty from her:

Return to Tuveso Beleth after you have safely brought her son to Koal Cave in order to finish this quest and receive your reward:

Mentioning the topic again after the completion of this question elicits the following response:

If, however, Deval Beleth died at some point while you were escorting him, Tuveso Beleth will obviously be upset and the quest will end in failure:

Speak with Tuveso Beleth again after you have finished her first duty to receive the second and last duty that she may offer to you:

Talk to Tuveso Beleth again to deliver the debt money to her and to finish this quest:

If you speak with her again after the successful completion of this quest, she says: