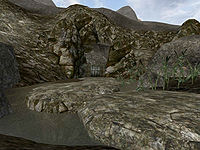 Nammu is a small cave in the Grazelands region to the west of Tel Aruhn.

This is one of those caves which may be difficult enough to find at first, but once you've found it, you'll wonder just how you managed to miss it. Situated about halfway between the Dunmer Stronghold of Falensarano to the west, and the Daedric Shrine of Yansirramus to the southeast, with Tel Aruhn a little further off to the east, this cave is the eventual destination of a late Imperial Cult quest, to find the Ring of the Wind. It is guarded by a band of six smugglers, one of whom, Galmis Dren, wears the ring. There is also an unusual Redguard prisoner, Jon Hawker, who will ask you for a Scroll of Divine Intervention in order to be freed.

The agent Seliulus Laenius provides medium training service in Speechcraft, Light Armor, and Sneak if he is snuck up on or calmed.

Sulesa is encountered right upon the enctrane. To the right are crates containing random leveled items. Couple crates hold Moon sugar and Ash Statues. Mornsu Omalor is also on the bridge. Over the bridge in next room to the nort-west are Seliulus Laenius and Moria Uulentanus. Urns contain food. Further deep into cave to the south-west Galar Baren is encountered. Pool doesn't contain anything interesting. Area at the top of staircase has Galmis Dren, Jon Hawker, any good amount of containers containing more smuggled items. There are also couple chests which contain random loot and gold. Urn next to potions contain scrolls. 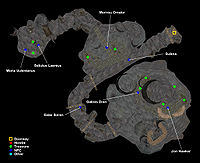