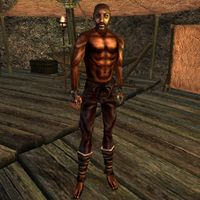 Jon Hawker is a Redguard trader who can be found in Nammu, where he is being held prisoner by Galmis Dren.

Jon needs a scroll of divine intervention for his escape, leaving you with some powerful magic gloves as reward, Zenithar's Warning and Zenithar's Wiles.

After he leaves, you will find out who he really was.

He wears common pants and Zenithar's Wiles and Warning. Like all Redguards, he has a natural resistance to poison and disease, and can boost his health, strength, agility and endurance for a short period of time. He also knows spells Dispel, Spell Absorption, Weak Spelldrinker, Reflect and Rally Humanoid.