This article is about the place. For other uses, see Mamaea (disambiguation). 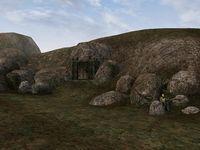 The entrance to Mamaea

Mamaea is a large Sixth House cave high on a hill west of Dushariran, in the West Gash region.

One of the interesting features of Mamaea is that it consists of "spine" or "bone" textured cave sections that run directly from the entrance to the depths, the Shrine of Pitted Dreams. Various Sixth House creatures lurk in the darker, more commonly textured caves on either side of this spine—including Dagoth Araynys, the only Ash Vampire outside the Ghostfence.