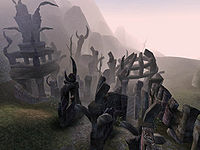 Dushariran is a shrine to Malacath on the West Gash road east of the fortress of Berandas. The exterior of the shrine is guarded by two Orc warriors both wearing full sets of Orcish armor. Upon entering the shrine, a long empty corridor and staircase lead to the shrine room, which is guarded by two more Orcs, a healer carrying a few potions and an agent named Shamob gro-Shatub. He is a medium trainer in Acrobatics, Light Armor and Sneak, provided you can calm him down. 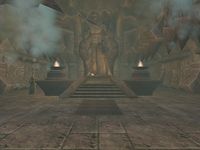 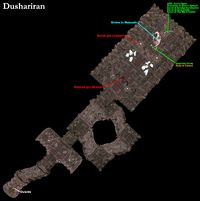