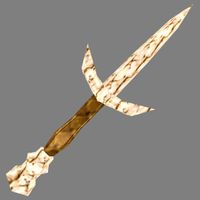 Black Marsh was once known to be inhabited with what the Argonians called the Wamasus. Northern men considered them to be intelligent dragons with lightning for blood. One such mighty beast, Haynekhtnamet, was slain by the Northern men, though it took 7 days and nights, and a score of men. One of the surviving men took a fang home as a trophy. The fang was carved down into a blade and fashioned into a small dagger. The Dagger mysteriously houses some of the beast's magical properties and grants the user the ability to do shock damage on an opponent. This unique Dagger is seen occasionally by traveling heroes. —Yagrum Bagarn, Tamrielic Lore

This dagger can be obtained by searching in an altar trough in the Shrine of Pitted Dreams, within the Sixth House base Mamaea (southeast of Gnisis).

The unimpressive-looking Fang actually deals the most stock damage (base + pre-enchantment) of all short blades in the entire game (including all official expansions and plugins), except against foes immune to shock, in which case the 10–35 base damage of the Goblin SwordTR has a 2-point edge. In the vanilla game, the closest to equivalence is the Daedric Wakizashi at 10–30 (however, it can be custom-enchanted to deal 20–58 in Shock Damage, or even more in Fire or Frost Damage, versus the Fang's 20–40, making the Daedric Wakizashi by far the most potent custom short blade in the game.) A character not yet capable of enchanting or paying for the enchantment of such a weapon can obtain the Fang relatively risk-free by using Invisibility to get to it, then heavily boosted Chameleon and Sneak to steal it, then Invisibility to get back out again; Chameleon potions and gear are fairly common and are effective when used in combination to exceed 100 points of the effect.