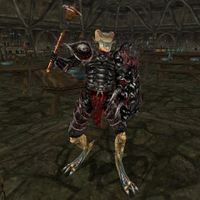 Lord Cluttermonkey is an Argonian farmer who can be found in the test cell: Clutter Warehouse - Everything Must Go!. He cannot be encountered in the game normally; you must use the CenterOnCell console command to get to this location. He is hostile, and will attack on sight.

He has a full set of Daedric Armor (including the boots and a Face of God helm, even though he can't wear them as an Argonian), and wields the Dwarven Mace Clutterbane, which has interesting enchantments that are useless because the weapon has 0 charge.

Lord Cluttermonkey is technically a merchant, though he is coded to only buy and sell Lockpicks and Probes. Since he has none of either in his possession, nor any gold with which to buy them, his service cannot actually be used. You will have to sneak up on him or cast Calm in order to dialogue with him anyway. He is also flagged in the CS as an essential NPC, so if you kill him, you will be given a notice stating that you have broken the thread of destiny and are now playing the game in a "doomed world". This is, of course, completely untrue, since he is only a test character, and this will have no effect on the completion of the Main Quest or any other quest.

Like all Argonians, he is immune to poison, has a resistance to disease, and can breathe underwater. Unusually, he is also completely immune to normal weapons. He knows the following spells: Chameleon, Daedric Strength, Fortify Blunt Weapons Skill, Fourth Barrier, Lightning Storm, Greater Shockball, and Summon Storm Atronach.