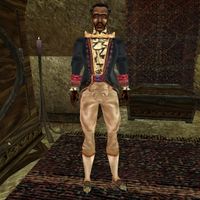 Gentleman Jim Stacey is a Redguard thief and Master Thief of the Thieves Guild on Vvardenfell. He can be found along with his close confidante Crazy-Legs Arantamo in the back room of Simine Fralinie's bookshop, in the east Canalworks of Vivec Foreign Quarter. He works tirelessly to prevent the Guild from being destroyed by the joint efforts of the Camonna Tong and their pawns, the Fighters Guild. He only gives missions to those ranked Captain and above. However, to those who have proved themselves a little, he is willing to entrust sacred Bal Molagmer quests, aimed at fighting injustice across Vvardenfell. There is a rumor about him being pretty mad about a few missing artifacts.

He is wearing an extravagant shirt, belt, pants and shoes. He wields a daedric shortsword. Like all Redguards, he has a natural resistance to poison and disease, and can boost his health, strength, agility and endurance for a short period of time; otherwise he knows no spells.