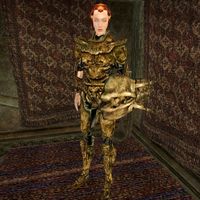 Eydis Fire-Eye is a Nord master-at-arms and a Guardian for the Fighters Guild. Eydis Fire-Eye can be found upstairs at the Guild of Fighters in Balmora. She is one of five people in Vvardenfell who can provide admittance into the Fighters Guild, and also assigns orders to Guild members. Eydis also provides major training in Axe and Blunt Weapon, and medium training in Long Blade, to Fighters Guild members of Protector rank and higher, and is, in fact, the second highest Axe trainer in Morrowind. She is a pious worshipper of the Daedric Prince Clavicus Vile and she serves the Camonna Tong.

Eydis wears a bonemold cuirass with matching pauldrons, greaves, boots, tower shield, and bracers. She wields a Dwarven mace and carries up to 50 gold. Aside from her natural resistance to shock, immunity to frost, ability to shield herself, and a natural frost damage spell, Eydis knows no spells.