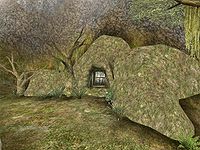 Addamasartus is a small slavers' cave immediately to the northeast of Seyda Neen.

This cave is home to a gang of three low-level slavers and smugglers, their three slaves, and a rat. It is an excellent place for new adventurers to get a feel for both combat and underwater exploration.

If you chat with Eldafire in nearby Seyda Neen, she might ask that you do something about the smugglers located here. It seems that she feels the guards in town are turning a blind eye to the problem. The trader Arrille will also mention them when he is talking about "practicing your skills" on outlaws.

All of the smugglers in this cave are hostile and will attack on sight. One of them is a spellcaster and another has a ranged weapon. 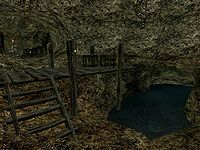 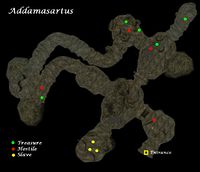