Lore:Ice Blade of the Monarch 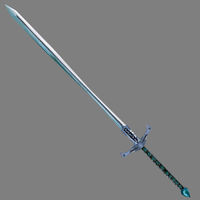 The Ice Blade of the Monarch (Morrowind)

The Ice Blade of the Monarch (or simply the Ice Blade)[1] is a claymore prized by Tamrielians. Using the soul of a Frost Monarch, the Archmage Almion Celmo of the Summerset Isles[2] enchanted the claymore of the great warrior Thurgnarr Assi,[3] who attempted to use it to commit regicide in some distant land, and become the new ruler. The assassination failed and Almion Celmo was imprisoned. The sword freezes all who feel its edge, and goes from owner to owner, never settling for long.[3]

In 3E 427, the Imperial Cult tasked the oracle Adusamsi Assurnarairan with recovering the Ice Blade from Llaren Terano, a worshipper of Molag Bal that was located in the Dunmer stronghold of Rotheran. The bandits there created an arena that housed slaves, which included Adusamsi once she was captured. The Nerevarine was sent to rescue her, as well with tasked with recovering the artifact, leading to the bandits extermination, as well as the freedom of the captives.[4] The Nerevarine subsequently sold it to the Mournhold Museum of Artifacts in 3E 427.[1]